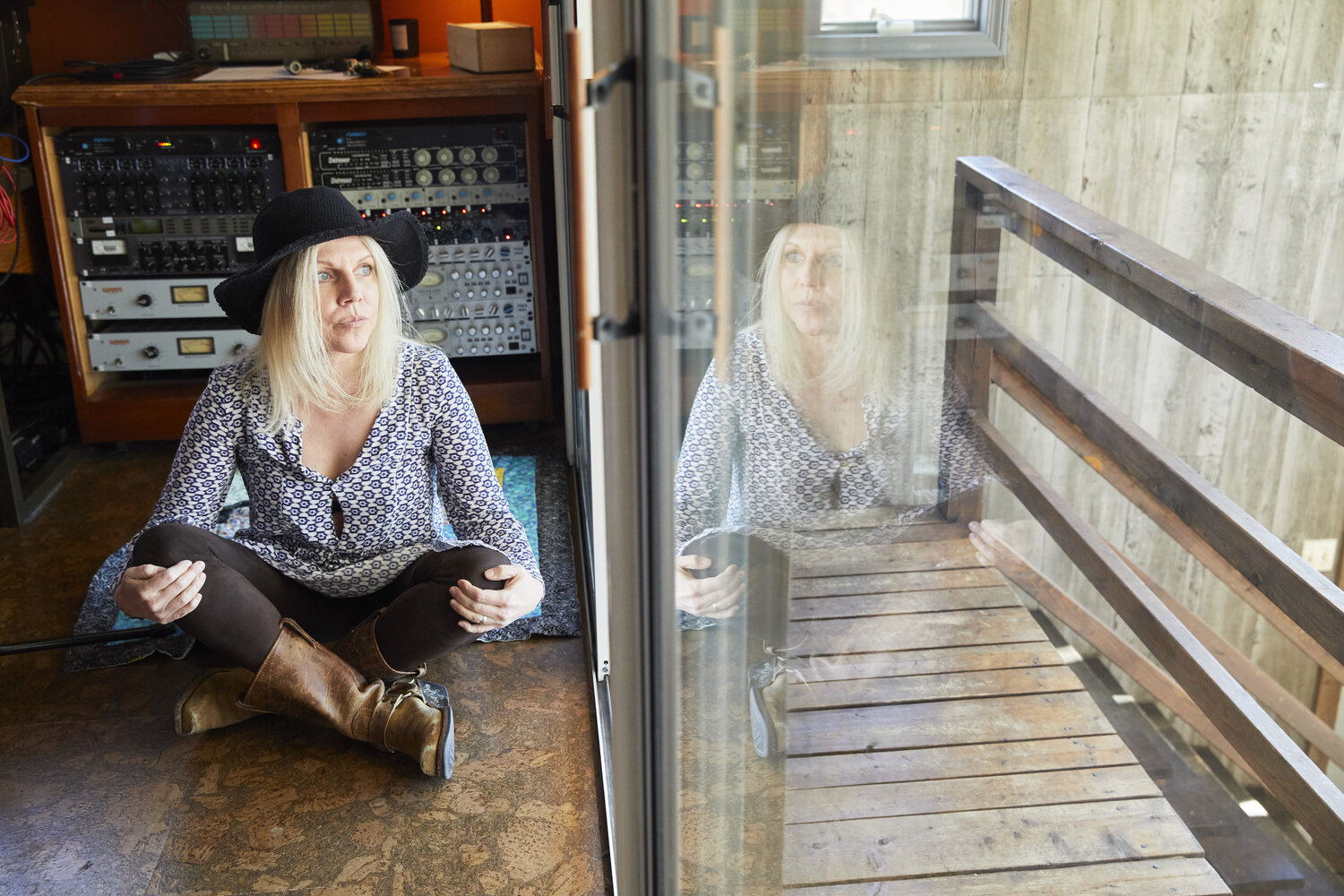 We always rent a touring van ~ ideally a splitter, but also happy with a 18 passenger van with the back seat rows removed.

The only breakdown story of any interest happened 100 years ago on the Belly/Radiohead tour when we were on a tour bus. Both bands were heading up a mountain to Gunnison, CO in a snowstorm to play the university there, and the Belly bus broke down halfway up the mountain. Our driver managed to contact the Radiohead driver on his cb and they turned around and came back for us. We left our bus on the side of the mountain and made it to the show just under the wire.

If the club or promoter supplies a rider, we make sure that rider is healthy ~ hummus, veggies, fruit, cheese ~ and we rely on that stuff for dinner and the next day’s road food. If we don’t have the benefit of a rider, we tend to mainly eat from markets rather than restaurants. I drink buckets of water on tour also, and double my usual vitamin and protein intake.

I’m knocking on wood as I answer this, but I rarely break strings. And I rarely change them, so not sure how I get away with this. I change strings about once a week tops on tour, and I’ve only broken a string a handful of times on stage. So it’s not a big expense for me.

My own rehearsal space has been the basement of my house for years, and it is remarkably uninteresting. But Belly rehearses in Gail Greenwood’s basement, which she calls the “Rock n’ Roll Control Center”, and it’s way more rock than my home cave. Most of Belly’s last album, Dove, was written and tweaked there. I am always strategically stationed under a large mounted statue of hairy buttocks, which is of course very inspiring.

It was at the Newport Art Association in 1983, I think. Our parents and their friends were there, as well as a smattering of our friends. My dad’s friend Tony Lioce was there, and he was the music critic for the Providence Journal at the time ~ he wrote a review of this small show, and we ended up getting ourselves booked in Prov as a result.

I have been a part-time post-partum doula for the last several years, and this has been by far my favorite day job to date.

A close follow-up would be a year as print-runner, model-builder, errand-runner and lunch-organizer for the visionary architect Moshe Safdie, a job landed for me by Gary Smith (producer and manager) and shared with David Narcizo (TMuses’ drummer).

It really depends on touring. If it’s a busy gig year, the income is pretty good. I still get royalties from across the years, but that fluctuates pretty widely, and isn’t reliable. I have no idea what to expect from the future, which is now frighteningly hypothetical. Hopefully, all will have returned to normal, the clubs I love will have survived and be open for business, and I will be releasing music and touring again.

Tanya Donelly and the Parkington Sisters is a collection of covers from Grammy-nominated, singer/songwriter and founding member of three of the most influential and successful bands of the post-punk era, Tanya Donelly (Breeders, Throwing Muses, Belly), available 8/14 on American Laundromat Records.

Connect with Donelly online and (eventually) on the road.