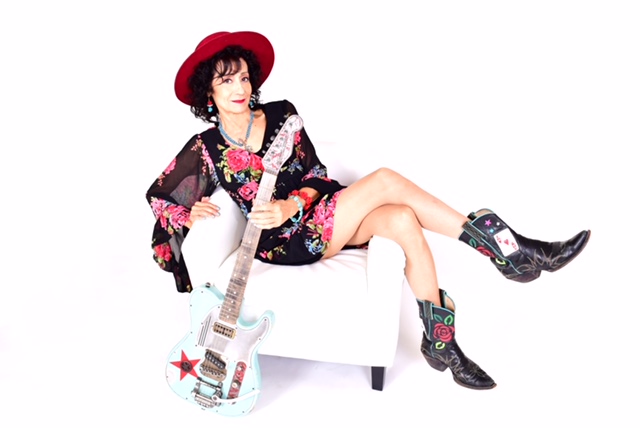 In my heavily touring days, while I was touring out of Nashville 2001-2006. I had a great Ford Windstar which I bought in 2001. I believe it was a ‘98. It had 24,000 miles on it. So, 200 thousand miles later, it handled a pretty good run for us, my Nashville band Rosie Flores and The Falcons. After that treacherous five-year run, the last mileage count was 224,000 miles. At that point, it was ready for a new transmission and that’s when the faithful Ford Windstar was retired for a new vehicle.

At that time, I left Nashville for a return back to Austin. I bought a Suzuki Vitara, SUV that had a 10,000 Lb towing capacity which pulled a 4×6 foot trailer. I continued to tour for a couple more years out of Austin until I decided I could make the same money staying in town or flying into the bigger festival shows or club dates in New York or LA.

When I was 18, my teenage band Penelope’s Children did a run from San Diego to San Antonio, Texas and our VW Bus was superb! I even painted the name of our band on the side in big psychedelic lettering. In those days, in the late 60’s, when gas prices were around 28 cents a gallon, our total cost on that run was around $25.00!!

Eating on the road is fun but I’m gluten free, so it’s a tough call if we are late for a show and have to get something on the fly and fast. When in a hurry, I try and order an Asian dish from Jack in the Box or a salad with protein somewhere. I spend good money on food when I travel, we stop at Whole Foods or a grocery store and stock up on healthy snacks and fruits, just so I can eat well, this way I stay well and and can save a few bucks and have the energy I need to keep rockin’. No one’s fun to be around when they are hungry, especially me.

I hardly ever break strings anymore. I’m endorsed by Ernie Ball and they just make great stings, the last set I put on lasted about a year, and I played constantly in my living room with livestreams through the pandemic.

For the past 10 or 15 years, I’ve done band or solo rehearsals in my living room or with my new band in a garage. We try and quit by 10pm so’s not to kill the neighbors. I used to love the rehearsal space in LA when I was a Screamin’ Siren. There was a large reflective mylar plastic sheet against the wall which gave us a mirror to see how we looked and so we could work up some choreography. The owner let us build up our tab and we paid it off bit by bit. Our band was in the punk rock scene and we tried to get good and rehearsed regularly but we never hit the big time.

Well, at 5 years old, my first original composition (ha ha) was “Candy Yummy For My Tummy” and that was the first line. Wrote that on my toy piano. I started seriously writing on my guitar when I was 15. I’m having a tough time remembering my first original tune. I’ll have to look through old notebooks to find it, I’m on a mission now.

My first performance as a singer was at Hale Jr. High in San Diego. At age 14, I formed a female trio, inspired by the 60’s girl groups ie: Supremes or Ronettes. We were called The Debs. We performed The Shoop Shoop Song. It was the worst stage fright I ever had. By the time I was 16 with a year and a half on guitar, I formed an all-girl band called Penelope’s Children, named for the Mythology characters Odysseus and Penelope’s children who were sons but we thought that was cool. We were awesome and played country rock and psychedelia tunes, a jam band with a vocalist. I kept the band together for years and had great support from my father who supplied our gear to help us get started!

My day jobs early on were various, from icing cakes in a bakery, teaching guitar at a local music store, office work, sorting return records for Mercury Records, head cook at a vegan restaurant to being a house keeper for the manager of the rock band X. Double shifting those last 2 jobs was tough while I was staying up all night with the Screamin Sirens, but after I left the band and got my country deal on WB Records, life became easier and more lucrative so the day jobs could go away.

My income has actually risen slowly through the years. With airplay and live shows, enough to keep my bills paid, it’s up and down and especially down during the pandemic. But on returning to live shows soon, I expect it will keep going up as I release new music. I’m planning on retiring from heavy road work in 10 years, but I hope to earn money through other means, like paintings, songwriting, and hoping to release a book of my memoirs and earn money through that and sales of my wardrobe and other collectables.

I started my career with one thing in mind. I wanted to be known as the lead guitarist for the first All-Girl rock band. I had zero sense of music biz tactics other than to have business cards to pass out, which read Penelope’s Children, “All Girls, Girls? Yeah Girls!” I also booked my own gigs. I wish I knew the importance of getting a solid manager and an agent early on, even after I was signed to Warner Reprise. It’s difficult to make the right decisions in a career when you’re trying to do it all by yourself. I knew a lot of the right people coming up but it was always hard to connect the dots. I never wanted to be that annoying person who keeps asking for help or favors form my famous friends, rather enjoyed just being a peer and hanging out and learning from them. That’s where a smart connected manager would’ve been so handy. I always hoped one would show up and I’m still waiting.

Rosie Flores has been a cornerstone of American roots music for more than four decades, leaving her mark upon the intersecting worlds of rockabilly, blues, western swing, California country, jazz, and roadhouse rock & roll. A guitar virtuoso and hard-touring road warrior, her milestones are just as diverse as her music, including nominations from the CMA and ACM Awards, a Peabody, two Ameripolitan Awards, and a long line of acclaimed solo albums. Still breaking new ground, she returns to her roots with her newest project, Rosie Flores and The Talismen.

For Flores, who grew up in San Antonio during rock & roll’s infancy, Rosie Flores and the Talisman’s vintage-leaning material marks a full-circle return to the sound that first sparked her love of music. She was raised on the sounds of the AM radio, harmonizing in her family kitchen to classic songs by Jerry Lee Lewis, Elvis Presley, and Buddy Holly. That music lay the foundation for a diverse career, with Flores fronting the alt-country group Rosie And The Screamers during the 1970s and joining a rockabilly-punk female band, The Screamin’ Sirens, during the following decade. She launched her solo career in the late 1980s, skirting the outer orbits of Nashville’s country mainstream with albums like 1987’s Rosie Flores before building a reputation as a rule-breaking artist whose records blurred the boundaries between genres.

Rosie Flores and the Talismen will release a double single on 9 July. Connect with Flores online and on the road.