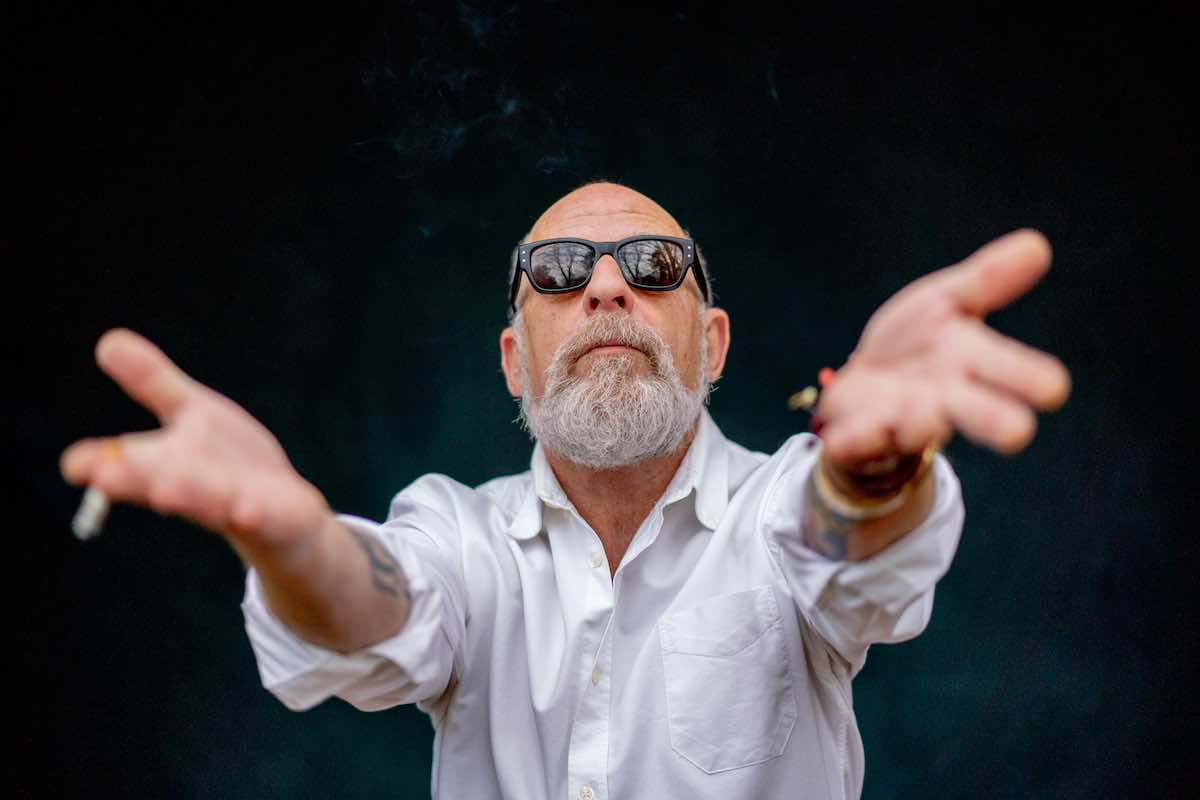 Primarily it’s a Southwest Airlines, emergency exit row aisle, I’ll pay the $40 dollar to get it. Otherwise, after literally hundreds of vans, we rent something with a decent stereo.

I turned 30 at McDonald’s rest stop on I-80 trying to get to Chicago.

Back in 85/86, my old band, Little Woman, would tour like a punk band even though we were a Reggae / Hippie shit show. We made up the tours, sometimes for 6 months out. We were a six-piece band with 3 crew guys and 3 dogs (apparently the crew requirements included having a large dog). We could never afford more than two rooms of whatever was the shittiest scabies infested crack house of a hotel (thankfully, half of us liked crack). This didn’t include the girlfriend, hitchhikers, drug dealers, who would end up on tour. Sometimes members hitchhiked, like Boulder to Houston, – I remember one tour I was on the back of a motorcycle for 2 months – a lot of camping, a lot of breaking into extra rooms. We had a massive orange van called the Pumpkin (I’m not saying we were creative), besides gear, it had 5 morgue-like slots that you could crawl in to try to sleep. There were problems like “the methaqualone and red wine“ tour, it was pretty gross, but we toured like that for years. I get really sad to think young kids in bands today, might never be able to tour in their own puke and wine-filled van with serious cabin fever meets rock ego compadres. December feels like 2 years ago with the pandemic, the 80s? Sometimes I look at a picture to convince myself it was real…

Those two things don’t go together. I had a band member in early sobriety so I went paleo in solidarity – in Texas. I could have flown to Paris for dinner and it would have cost less.

If possible, someone else strings guitars. On a solo acoustic tour, I restring myself every night, so $20?

We don’t rehearse, ever, it fucks the vibe, though the keyboard player, Jenny (Conlee), and I recently rehearsed with face time. It was icky but it worked.

You can only play it a special land
The land is love land
Where all of the sand
Is love sand ….

I have never written a better lyric.

A La Jolla kegger thrown by my 7th grade drama class. We opened with “Oye Como Va” into “Suffragette City”.

I have never had a “day, “ or night for that matter, job.

It’s always ebbed and flowed. I’ve made a living, but I’ve had a lot of help from friends. There hasn’t been a lot of correlation between moments of high public visibility and peak income. It seems I don’t have to work quite as much to make the same amount of monies. Though BMI and such went away to the tune of 75% when Spotify arrived, now with Covid 19, it’s been interesting to say the least. A couple of weeks I’ve made more streaming than a week on tour (net) and some weeks crickets!

Actually I often say, possibly my biggest work / life regret was not believing people who told me how young I was at 30 years old. I assumed I was done and that led to “see above “. Who know I’d survive and still be working at 59 …

Actually I have a third, watching your babies grow will always be a better use of ones time then, ”man we really need to do another east coast tour.“

For more than 30 years, Jerry Joseph has been strapping on a guitar and chasing down truth, understanding and soul with a tenacity and resonant skill that mark him as a hard charging kindred spirit to Joe Strummer, Warren Zevon and Patti Smith. While not a household name or critic’s darling, Joseph is the archetypal musician’s musician, something resoundingly clear in his live performances, as well as his studio work.

Joseph first came to prominence in the mid-1980s with still-beloved cult band Little Women, a reggae-rock proto-jam band that dominated the Rocky Mountain club scene for nearly a decade, and notably helped break jam giants Widespread Panic, who looked up to Joseph and opened for his band before rising to prominence. In fact, Joseph wrote many of Panic’s favorite concert staples, including such blazing epics as North, Chainsaw City and Climb to Safety.

The Beautiful Madness, Joseph’s latest album, was produced by Patterson Hood and recorded with Drive-By Truckers. Connect with Joseph online and on the road.