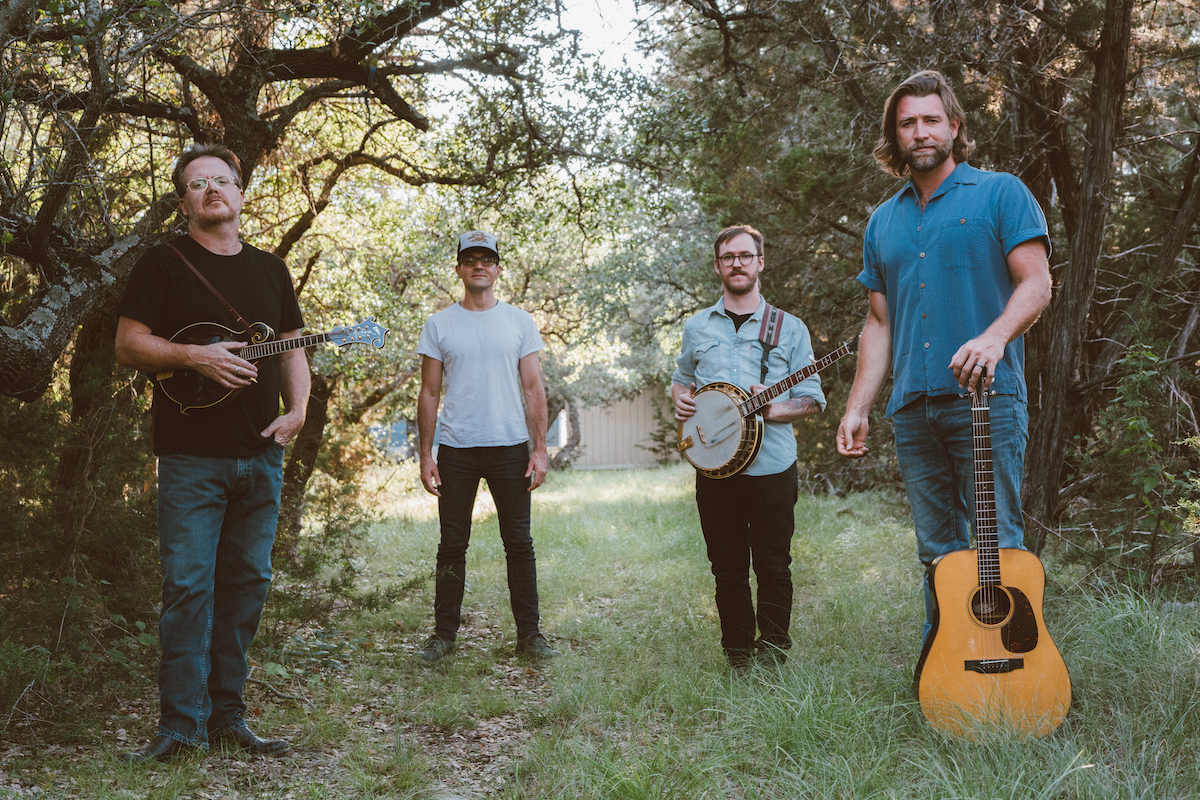 It’s a Ford van that is in desperate need for some use right about now. Anybody in the market for a Ford Transit with low miles? Signed our lives away on it last year, now it’s waiting for the repo man.

Try to eat as little as possible on tour. Practice ancient traveling techniques of the early minstrels and cowboys, sticking with what we know is safe, like Lager and Coffee.

According to our books, In a regular year about 2.75. In a leap year more like 2.69. Strings are usually less of a problem than Upright Bass bridges, which have a tendency to collapse on stage, especially in Fort Collins, CO.

Thanks to D’Addario we get strings real cheap, when we can remember to order them. What’s more important than how many you break is how fast you can change them. I have been called the ‘fastest mandolin string changer this side of the Mississippi’ on both sides of the Mississippi.

It’s half of a one car garage with so many instruments and amps and computers and mics that we don’t all really fit in it without standing. more of a ‘demo chop shop’, really. So we keep our rehearsals short, and so raucous that it’s difficult to remember what we worked on. It’s dark, dank, dusty, and lonely right about now…..

Without having my old notebook in front of me, the best first song that I can remember ‘writing’ myself, and would be willing to share!, would be ‘Propaganda’. I was probably 16 and it came with special help and thanks to a radical poster my mom had hanging on my wall as a kid. It went something like “Wake up America! Civilization Calls!/Every Man, Woman and Child, Civilization Calls!/ Raise your fists in Rage, Propaganda’s on the way/Raise your fists in Rage, Propaganda’s on the way”

For me, it was In El Paso, TX, Playing outside at the zoo for Mona the Elephant’s birthday with my band, Distorted Silence.

Last job that didn’t involve mandolin was as a cook in 1997 and that would also be my favorite day job.

It goes against my raising to talk about money. I will say this: music is not something I got into for money. It requires sacrifice. It means not accruing a lot of bills, smart decisions and luck regarding how and where one lives, not having hobbies or new cars or buying new music or tickets to shows, learning how to fix stuff oneself, and whatnot. It doesn’t matter how much we do or don’t make, or think we will or won’t make. A life in music is a life of public service. Music, the healer, the diplomat, the universal language, is a gift to be able to provide, and that is the greatest ‘income’.

It’s not about me.

With their 2018 GRAMMY nominated record North of Despair, it’s the melding of hard country songwriting with high-octane bluegrass instrumentation that makes for Austin, TX based Wood & Wire’s signature sound. Tony Kamel, Trevor Smith, Dominic Fisher, & Billy Bright cut these tunes live to tape with minimal editing bringing the well known ferocity of their live shows, and an impromptu joy to each track – a joy that developed out of playing over 150 shows a year since 2014. This is really their first studio record since they began touring nationally, making it their most definitive to date. Booking now for 2020, these guys have developed a solid reputation of giving joyous and heartfelt performances, often described as having the best of both the traditional and progressive sounds, with a unique backbeat feel influenced by Texas sounds they’ve honed in over the years.

No Matter Where It Goes From Here, the group’s latest album, will be released on 28 August. Connect with the band online and (eventually) on the road.