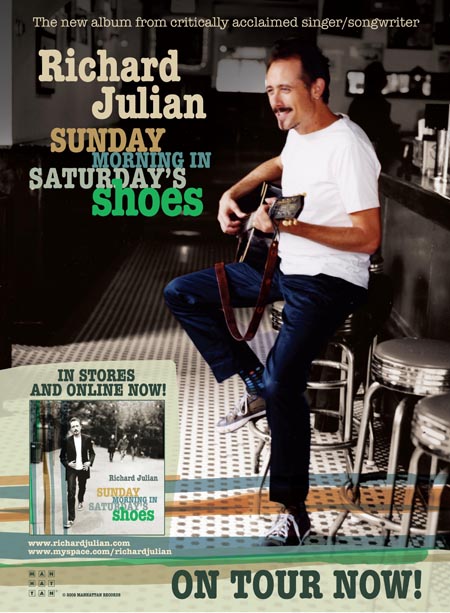 One album you might find under the radar this year comes from New York City’s Richard Julian, a singer-songwriter whom you may know from his recent work with close friend Norah Jones in a side project called The Little Willies, a concept originally conceived as a Willie Nelson cover band. The album is called ‘Sunday Morning in Saturday’s Shoes’ and it consists of 11 mostly acoustic tracks exploring styles ranging from folk to blues to pop. Seen regularly around the Big Apple, you may hear Julian compared to such greats as Paul Simon, Lyle Lovett and Randy Newman but let us not forget John Prine who should also be included in the comparisons. Yet Richard Julian is his own artist. Drawing writing inspiration from the big city in which he resides his lyrics are full of wordplay and irony. One need to look no further than the title of the album to see this clever wordplay in action. I’ve had this record in high rotation for much of the year and it gets better every time. Give fan favorite “If You Stay” a try and be sure and listen to my personal favorite track “A Thousand Days”.

Richard Julian and Sideways Media were kind enough to answer some questions and offer up a signed poster along with a copy of ‘Sunday Morning in Saturday Shoes’ to a lucky Twangville reader. See below for details.

[Twangville] “Sunday Morning in Saturday Shoes” really does a great job of showcasing your songwriting abilities, was the material for this album something you had been holding on to or did you set out to make a record from scratch?

[Richard Julian] The songs weren’t written all at the same time for a specific record. It wasn’t like I was focused on a singular idea. I was just writing over the course of time since my last record. It all just kinda congealed organically.

[Twangville] What do you do as preparation to get in the songwriting mode? Does it come naturally over biscuits and gravy or is it something that you really need to work at?

[Richard Julian] I try to write as often as possible. Even if it’s just a line or two. I work on songs most mornings. First thing if I can make it happen. I’ll sit down and try something even if I don’t necessarily feel inspired. Other times it just sweeps over you like a tidal wave. That’s a good feeling. If biscuits and gravy are included, that’s even better.

[Twangville] Paul Simon sometimes comes up when referring to you and it seems that NYC is synonymous with both of you. Is that true, would you ever find yourself anywhere else?

[Richard Julian] I find myself everywhere else all the time as I do a lot of travelling/performing. The current songs I’m working on are reflecting that more I think. But New York has always been an inspiration. It’s a city like no other.

[Twangville] Where is your favorite place in NYC to perform?

[Richard Julian] When I have new material I need to road-test, I always call the Rockwood Music Hall. That’s a club built with all the right intentions. Good room to let loose.

[Twangville] Where can fans expect to see you in the near future?

[Twangville] Any chance for a Little Willies reunion?

[Richard Julian] Well we never broke up so I don’t know if we can have a reunion. There is talk of another recording though. I would like that.

Richard Julian and the fine folks at Sideways Media are offering up a ‘Sunday Morning in Satuday’s Shoes’ CD and signed poster right here on Twangville and all you have to do is leave a comment below to be eligible. Please limit yourself to one comment per person. Contest ends Friday, 8/15/08 at midnight EST. Winner will be contacted by e-mail prior to any announcements.*

Purchase ‘Sunday Morning in Saturday’s Shoes’ at Miles of Music and Amazon.

* By participating in this contest you agree to allow Twangville to post the winner’s name and city on our web site.