My third showcase of the night on Wednesday was when I struck gold for the first time “officially” this year, and I knew it almost as soon as the Playing Favorites began their set. 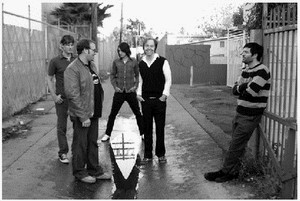 The Playing Favorites are a supergroup of sorts, featuring members of Me First and the Gimme Gimmes (itself a supergroup), Sugarcult (with whom I made my own South-by onstage debut, joining them for a cover of “I Wanna be Sedated” at the end of their set in 2000), the Pen Fifteen Club, Summercamp, Lag Wagon, and the Rentals. As a result, the bands boasts four singers, all of whom are also songwriters (the fifth member, the drummer, does not sing). This only became apparent to me by the time the fourth of the members had fronted a song during the set … but what was most impressive was that every song by every singer was a winner.

Now is as good a time as any to mention that my all-time favorite band is the Replacements, so when I say that the Playing Favorites –to a man– write and perform songs in the key of ‘Mats, you should know that I’m paying the ultimate compliment. But not only do the songs of this band capture the spirit and energy of the mighty ‘Mats, but their onstage mannerisms and banter did so as well. Not in a calculated fashion, mind you, but rather in an off-the-cuff, five guys having the time of their lives onstage in front of an appreciative audience, while not taking themselves too seriously fashion. To illustrate that fact, while tuning between songs at one point, Joey Cape quipped, “I hate this kind of music, ‘cause you have to be in tune … in punk rock you don’t have to worry about it.”

Two songs in, I was urgently texting a friend (and fellow Replacements fan), “get over to the Red Eyed Fly now … this band is a lock to win the Spirit of the ‘Mats award for the year.” By the end of their turbo-charged set, I knew beyond any doubt that the Playing Favorites were the band to beat as my favorite discovery of South-by ’08.

In a funny coincidence, the venue where this show took place, The Red Eyed Fly, was also where I first saw Grand Champeen, who were that particular year’s winners of the Spirit of the ‘Mats award.

Check out the Playing Favorites’ “Indigenous Waiting” (courtesy of SXSW), and if you dig it, be advised that there’s plenty more where that came from on their album, I Remember When I Was Pretty.

(Other fine bands that the Playing Favorites beat out in laying claim to being the highlight of my night included: Oliver Future, the Red Romance, the Hard Lessons, and Bon Iver.)