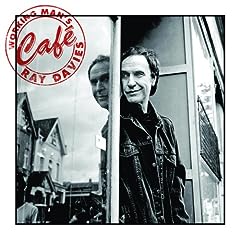 With his second solo album, former Kink and Rock n’ Roll Hall of Famer Ray Davies brings us ‘Working Man’s Cafe’. The album features 12 new songs penned by Davies who co-produced the album with Grammy Award winning producer Ray Kennedy (Lucinda Williams, Steve Earle, Delbert McClinton). Pony up for the deluxe version and you’ll get a DVD bonus containing a short documentary film called “Americana – A Work In Progress” filmed and directed by Davies himself. It offers a look at life on the road from the perspective of the artist in a post-9/11 America. The film finishes off in New Orleans the city which inspired many of the songs on the new album including “Morphine” which was written when Davies was in the ICU of Charity Hospital (LSU) after being attacked and shot in New Orleans. Check out “Vietnam Cowboys”, “In a Moment”, “No One Listen” and “Hymn For A New Age”. File under: Rock / Acoustic / Folk

See our Release Calendar for more new releases like these.

Stuff happening with Twangville and our friendly neighbors.