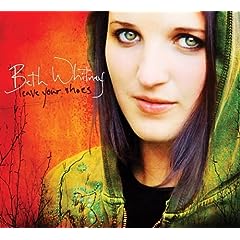 At this point in the year there’s less new music to talk about. Its that time for the record companies to start releasing the records that they know we’ll buy for the holiday season like our beloved Christmas albums and “best of” records for our friends and family. That’s not to say that there’s unexciting music coming out as Led Zeppelin’s new compilation will certainly prove popular. But it does make it harder for folks like us to find those late release gems. Frankly, I wasn’t sure who to highlight this week until I noticed a few zealous fans picking Beth Whitney‘s Leave Your Shoes in our weekly poll. So I went over to MySpace to see what the fuss is all about and dang if I didn’t find a Seattle sapphire. She’s a 23 year old singer/songwriter from Snohomish, WA who rightly claims Mindy Smith as an influence with her silky vocal delivery. Definitely check out her music for yourself. I recommend starting with “Miss Misery” and “Wayfaring Stranger”. File under: Folk / Pop / Acoustic

Stuff happening with Twangville and our friendly neighbors.