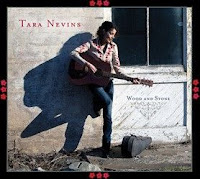 When we last saw Tara Nevins, do her own thing, outside of the Donna the Buffalo “herd”, it was an award winning Bluegrass album, but it has been over 10 years since Mule to Ride. On her new release, Wood and Stone,  she showcases a broader stroke of the Americana landscape. On the surface it invokes a similar territory travelled by Donna, but on her current solo project Nevins puts aside the jams. Instead she delivers a Country leaning effort that conjures up a time before the Opry. An era just before Nudie began making his sequined suits for Little Jimmy Dickens and Hank Williams (and a long time before he made the infamous gold lame’ suit for Elvis). It is the music sung by and to the rural poor, who lived on the margins of the Post-Depression era economic recovery. People whose lives were defined by their broken relationships.

The earthy tunes on Wood and Stone are captivating. Nevins takes the past and utilizes drums and a steel guitar, to ensure the album is still contemporary. However, the real bridge between past and present is a voice, so singular and beautiful, that it must be heard to be appreciated. Ask any one of the “herd” who has followed her for years, and they will back me up. It has been too long since we heard from Tara Nevins as an individual artist, but the wait was worth it.