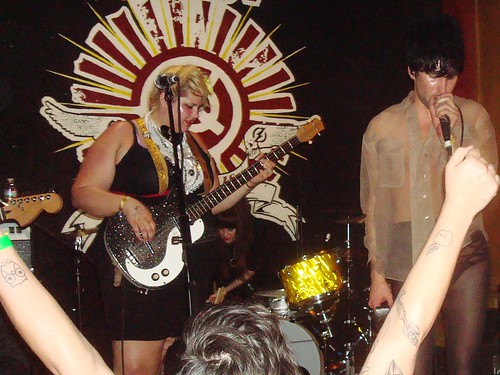 In a world where boys who can’t sing aren’t allowed to be lead vocalists in 1960s-style girl groups, only one hero was gay enough to defy the odds: Hunx

-eMusic’s capsule description of Too Young To Be In Love, the debut album from Hunx & His Punx

I first heard Hunx & His Punx in the second of the two SXSW 2011 torrents which dropped just a week before South-by got underway and included the instant-classic-in-my-world “Too Young to Be in Love.” Featuring a frontman whose nasally vocals evoke pleasing (to my ears anyway) thoughts of a young Jonathan Richman fronting a band that amounts to a stunning contemporary rendition of ‘60s girl group goodness, this ‘60s girl group pastiche is delivered pleasantly devoid of any evident camp or insincerity… Hunx & His Punx play it straight.

Audio Download: Hunx & His Punx, “Too Young To Be In Love”

It’s probably worth noting, however, that his approach to the material is pretty much the only thing about the rather flamboyantly gay Hunx that can be described as “straight.” Of course, in this context, all of the songs about “boys,” “boyfriends,” “ex-boyfriends,” and (of course!) dead boyfriends, work like a charm, just as they did with the original girl groups … you know, back when they were fronted by girls. Hunx & His Punx play their delightfully refreshing, note-perfect take on ‘60s girl groups with what’s clearly great affection for the form, and they’ve captured the spirit of those teenage crush stories perfectly … albeit with the aforementioned gender-bending change-up of having a gay, male lead singer fronting an otherwise all-girl group.

I was extremely curious as to how the songs of Hunx & His Punx would go over in Red 7, one of Austin’s most venerable bastions of punk rock (and where I’d seen the Riverboat Gamblers and Fake Problems rock out earlier in the day). But when the band and their ‘60s girl group sounds went over not only well but extremely well with the near-capacity crowd in the sweat-soaked dive bar, it occurred to me that, really, what could be more punk than a flamboyantly gay man fronting an all-girl ‘60s girl group-style band in 2011?

Song after song throughout their set, Hunx & His Punx (Punxettes?) showcased their original compositions in the time-honored ‘60s girl group tradition, with nary a cover in sight, which only served to make them all the more impressive. Or at least if there were any covers in the bunch, they were songs that were unfamiliar to me anyway, and I like to think I’m reasonably familiar with the classic girl groups.

Bottom line: Somewhere in the California penal system, Phil Spector ought to be smiling. Doubly so, in fact, given that Spector’s work producing the classic girl groups of the ’60s and his later work with the Ramones likely had an equal (and equally seismic) effect on a young Hunx.

Postscript: I wrote my first draft of this piece on March 29, which was the day that Too Young To Be In Love (the album) dropped. As you might’ve inferred from the epigraph at the head of this piece, the record is available on eMusic, where I purchased a booster pack that very day in order to pick it up. What’s not available on eMusic (and more’s the pity), however, is the previous release from Hunx & His Punx, a compilation of singles appropriated titled Gay Singles. It’s that earlier collection that I’d been listening to for the better part of a week since my return from Austin, and though it’s not in the same girl group style as Too Young To Be In Love, and features a more ‘50s rock-influenced style of music (albeit thrown into a blender not dissimilar to the one the Ramones applied to their own approach to early rock rhythms), it’s about as addictive a collection of singles as you’re likely to come across, and I commend it to your attention as well.

Interestingly, while seeking video to accompany this post, I discovered an earlier version of “Too Young To Be In Love” by Hunx & His Punx, done not in the girl group style of the version which appears on the album (and despite the fact that the video features Hunx’s Punx as his fellow gang members), but sounding very much of a piece with the semi-punky ‘50s-influenced style of the songs featured on Gay Singles instead. It’s every bit as great as the album version though, and I’d buy it on the spot if I could find it for sale anywhere:

The only words of caution I’d offer with regard to Hunx & His Punx are that they’re probably not for a) homophobes or b) those to whom adenoidal vocals are anathema. Anybody else who loves rock ‘n’ roll, (and especially ‘60s girl groups), however, is doing themselves a disservice if they don’t get some Hunx & His Punx in their lives and onto their iPods (or iPod equivalents).

Twangville gratefully acknowledges matzohball77 for permission to use the photo above. Thanks!