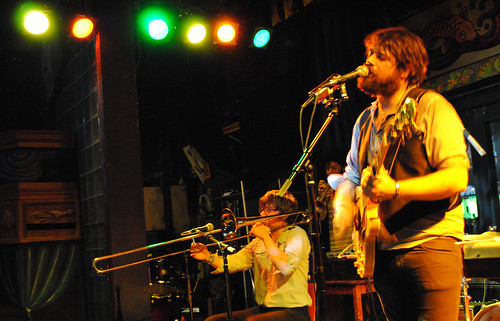 My Jerusalem, the band that I would leave SXSW 2011 proclaiming to everyone willing to listen as having been the best new band I saw all week, and the one that I knew would present me with the tallest order in terms of doing them justice with mere words, was a band that I hadn’t even intended to see while in Austin. Not out of any conscious, decision-making process, mind you, but because, embarrassing though it is to admit, I was completely unaware until just a few hours before their Thursday night showcase that Jeff Klein (of whose solo work I’ve been an admirer for going on ten years now) had even formed a band called My Jerusalem, a collective including members of the Twilight Singers, Great Northern, Cursive, the Polyphonic Spree, and Midlake. (And yes, I now realize that I somehow missed Mayer’s recommendation of the band in his August Playlist last year, and at least one previous SXSW appearance of theirs. Mea culpa.)

By turns haunting, evocative, ethereal, and raucous, the songs of My Jerusalem are rock ‘n’ roll practiced at the highest level; rock ‘n’ roll as Art. Yes, friends, My Jerusalem make music of a caliber that merits even the pretentious use of the capital “a” in Art. Every now and again, the devoted rock ‘n’ roll acolyte is granted a vision of a band that, in addition to simply crafting songs composed of words and music that speak to the listener, whose songs also feel instantly like letters-in-music-form from a dear friend. My Jerusalem is a band that’s making music that feels important, music that feels like it genuinely matters, and that gets under the listener’s skin and scratches their very soul. I don’t know about you, but I’m not made to feel this way too terribly often by a band, but My Jerusalem has accomplished the feat, and it all started with the magnificent, jaw-dropping performance I witnessed in Austin just a couple of weeks ago.

That a rock ‘n’ roll band evoking such feelings would consist of a group of gifted musicians is kind of a given, but that such a band would employ (as My Jerusalem does) both a horn section and strings to augment and complete their sound might be somewhat less of a given. Pretty much anyone who knows me, however, is all too aware that the inclusion of a horn section is among the quickest ways to my heart musically, and the addition of horns and strings to a live rock ‘n’ roll band has been known to positively lift my spirits to the heavens in the past (cf. my review of the Alejandro Escovedo Orchestra in this space two years ago). My Jerusalem, with just such a winning combination of rock ‘n’ roll, horns, and strings, along with a supremely gifted songwriter and frontman in Jeff Klein, has once again moved me to a paroxysm of praise.

For a representative sampling of the austere majesty of My Jerusalem, may I humbly suggest the album opener, “Valley of Casualties” which, if I recall correctly, was also the opening number of their SXSW showcase. It’s also my current favorite song of theirs, though in truth, there are already several others jockeying for that title.

Needless to say, since I didn’t even know the band existed until just three hours before the show, I wasn’t familiar with any of the songs played, but I can tell you that there wasn’t a single song in the bunch that was anything less than remarkable. If I were to compare their sound to that of other bands, I’d reach for a combination of Crooked Fingers and the National, but though there are elements that remind me of both those bands, make no mistake, My Jerusalem’s sound is wholly their own, and it’s a sound that I find hard to believe wouldn’t resonate with pretty much the entirety of the Twangville audience.

For a taste of the live experience, as well as a sample of the most raucous song in My Jerusalem’s catalogue to date, NPR provides a one-minute snippet of “Sweet Chariot” from the very SXSW showcase of which I write:

As a final note, I’ve already privately thanked the friend who tipped me off to the existence of My Jerusalem, but I’d like to take this opportunity to thank him publicly as well. Todd Ohlhauser is the man behind the Mercy Lounge and the Cannery Ballroom in Nashville, and it was he who clued me into New Jerusalem and their (only) SXSW set, so if this post helps turn you into a fan of the band, and if you live in/near Nashville (or plan to visit), why not stop by the Mercy Lounge, have a drink, catch a show, and tell Todd “cheers” for the My Jerusalem tip while you’re at it? Better yet, tell him Twangville sent you.

And hey, word on the street is that My Jerusalem will be hitting the road, and departing their Austin home base for a string of U.S. tour later this year, so you might even be able to catch them at the Mercy Lounge. If they’re coming to your town though, whatever your town might be, please don’t miss an opportunity to see this band perform live. And hey, feel free to tell them that Twangville sent you too.

Twangville gratefully acknowledges Andrew Norman at HearNebraska.org for permission to reproduce his photo from My Jerusalem’s SXSW appearance.