Given that friends and colleagues always ask upon my return from Austin who were my absolute favorites of the new bands I saw at SXSW each year, I’m going to focus my attentions entirely on the new-to-me bands that I left Austin wishing most fervently that I could see play again right now. As it turned out, all three of my favorites this year were bands I had been eagerly looking forward to seeing based on their .mp3s in this year’s SXSW torrent (the primary means I use to “audition” bands for a spot on my South-by schedule), but the very best new band I saw all week proved once again that man can’t live by his predetermined SXSW schedule alone, and that allowances must be made to call an audible every now and again when in Austin.

More on all four of those bands later, he said, shamelessly burying the lede.

I should mention that this focus on the most exciting new-to-me sounds discovered in Austin is fully in keeping with my philosophy when in Austin for SXSW. I’m there to discover my soundtrack for the year ahead (and beyond), the new sounds that will have me tapping my toes, dancing around the house (badly, but with enthusiasm), and singing along (also badly, to say nothing of loudly, but with equal enthusiasm), and that’s a process that begins with the torrent. This year there were two torrents released, compiling between them all of the .mp3s provided by participating bands from the official SXSW site, totaling over 1,100 songs (one per artist). That’s a lot of songs to audition, but it’s still just slightly more than half of what were reportedly upwards of 2,000 participating bands this year, so consider this my annual plea to all bands playing SXSW: If you want potential fans to come see you, please include an .mp3 with your bio! 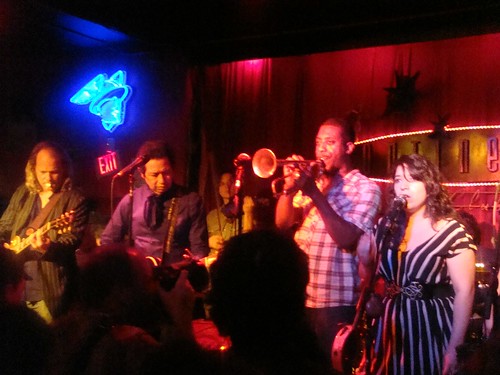 There is, however, one guaranteed exception to my dedication to the discovery of new sounds each year, and that’s Sunday night’s always excellent and never-less-than-essential closing ceremonies for the, ahem, South-by “true believers,” as hosted by Alejandro Escovedo and Friends at the Continental Club. Given my stated purpose of concentrating on the new, I’m not going to devote an entire post to the show this year as I have in years past, but suffice it to say that it was another superb night of live music, culminating in a special, guest-filled, only-in-Austin-for-South-by set from Alejandro Escovedo and the Sensitive Boys. I haven’t missed one of these shows since it moved to the Continental Club twelve South-bys ago, and it’s consistently been a highlight (if not the highlight) of SXSW for me every year. Featured guest shots during Alejandro’s set this year included Lucinda Williams who joined Al for a duet on “Pyramid of Tears”:

Frequent “South-by Sunday” guest Charlie Sexton took a break from his role as Bob Dylan’s guitarist on the never-ending tour to lend his trademark guitar fireworks to a trio of covers that brought the show to its rousing close. Included among the three were two covers that it was my privilege to be hearing Alejandro play for the first time. The first of these was the Stones’ “Miss You,” also featuring Wammo from the Asylum Street Spankers on harp, and presented to you here courtesy of my friend Jamie who captured the moment on video:

Next up was a cover of the Band’s “It Makes No Difference” which, simply put, was easily and absolutely among the highest highlights of a typically highlight-filled South-by for me this year. This one was otherworldly, folks, and I doubt that any recording could truly do it justice, so it’s probably just as well that, as far as I can tell, none has surfaced. If you were there at the Continental Club, you knew you were witnessing something truly special, a performance unlikely to ever be forgotten by those in attendance on this most special night of South-by. Heck, I was even talking after the show with some of the performers who’d shared the bill, and who were equally awestruck and at a loss for words to adequately describe just how powerfully moving the set-closing performance of “It Makes No Difference” was.

The show was brought to a close with a one-song encore in the form of an extended version of “Beast of Burden,” another Stones number (a band in whose honor Alejandro seems to be well on his way to having recorded a live tribute album at this point), in an appropriately raucous, and equally joyful performance … both among those onstage and among those in the audience, several of my friends and I most definitely included.

Sheesh, even when I try not to write about the magic and the majesty of South-by Sunday night at the Continental Club, it seems I just can’t help myself, huh?

On that note, I’ve got one more item from the show that I need to share. In my humble opinion, the quote of the week occurred during Jesse Malin & the St. Marks Social’s typically scorching set when Jesse told the assembled faithful, “We came down here for SXSW not to get a record deal, find a manager, or gain Facebook status … we came because Alejandro asked us.” How can you not love that, right? And hey, guess what, Alejandro fans? Jesse Malin & the St. Marks Social are heading out on the road with Alejandro & the Sensitive Boys for a couple of weeks from April 21-May 6, so whatever you do, make sure to arrive early to catch their opening set if the tour is coming to your town. You can thank me later.

OK, so enough with the prelude already, right? Let’s get down to the business at hand … revealing the four bands that I’ll be coming at you each day this week with a new post dedicated to detailing my newfound love for their music (and, if all goes according to plan, turning many residents of Twangville onto them in the process). For anyone who’d care to study up in advance of my coverage, what follows are what, comic book geek that I am, I’m calling the “Fantastic Four” of SXSW 2011 so, without further ado, here they are … my picks for the Fantastic Four of SXSW 2011, or, John’s Picks for the World’s Greatest New* Bands at SXSW 2011…

*New to me, anyway … I realize I’ve been sleeping on these bands for up to a couple of years already. I already lament the years of lost potential listening time enough as it is though, so please don’t rub it in.