Sometimes it’s amazing how changing just one instrument changes the whole sound of a band.  You can hear that happen a few times in the latest release from The Acoustic Burgoo, Soul Bucket.  From the folky, acoustic, harmonies of Appalachia, band member Rudy Bzdyk (sic) chimes in with his trumpet and suddenly you’re down in the steamy clubs of New Orleans.  That sound really peaks on, IMO, the stand out song of the album, White Wolf.  But you also catch it in Stealin‘ and My Bucket’s Got A Hole In It.  The jazz influence is at its most extreme in Tell You Again, that’s what you imagine it would sound like if Ornette Coleman did bluegrass. 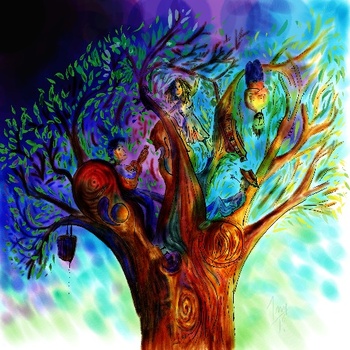 Having said all that, this isn’t a jazz album–it’s bluegrass at its core.  There are lots of banjo picking, fiddle playing and high lonesome harmonies.  The group is led vocally by Melissa Wright, who effortlessly goes from folksy, airy Americana to sultry torch singer to an indie bent ala Sarah Jarosz.  In fact, perhaps the best comparison is Mumford and Sons only with a female vocalist.

There are also a number of great folk songs on the album.  The River tells the tale of acceptance of life not quite what one dreams of, “chances are we won’t make it, chances are we’ll fall down”, without taking the melancholy feel too far.  The disc starts out with Your Love On Down the Line with a good harmonica part and lots a great harmonies.  I Am Weary is a study in suffering.  And Gospel Plow is sort of a combination of gospel prayer and dirt farmer’s lament.

All the members of The Acoustic Burgoo are still in college and generally studying music.  So it’s hard to predict how their sound will evolve.  But Soul Bucket is a great foundation that showcases their instrumental capabilities and vocals and hints brilliantly at the potential this group has no matter what direction they end up deciding to pursue.