This year marked the 10th version of the world’s largest music festival. It’s grown from 13,000 people watching 9 acts on 2 stages in one day, called Strictly Bluegrass, to a 3-day event with nearly 90 acts on 6 stages with 650,000 attendees, called Hardly Strictly Bluegrass. All of it free: paid for by philanthropist Warren Hellman. With that many people it’s impossible to see everything you want, but with that in mind here are some of the highlights I saw. 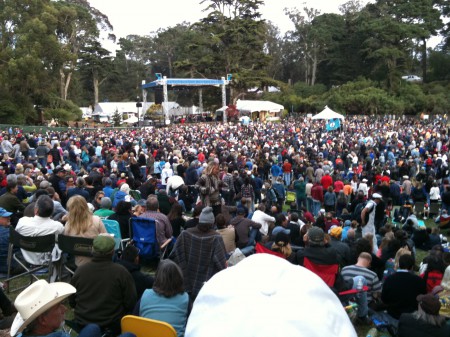 Being a blogger doesn't get you any closer to the stage

Best Family Reunion – Certainly the biggest surprise was Phil Alvin showing up to sing a rousing version of Marie, Marie with brother Dave during the Dave Alvin & the Guilty Women set. However, the winner in this category had to be sisters Shelby Lynne and Allison Moorer performing together publicly for the first time in their long careers. Lots of anecdotes about growing up in Alabama and a teary-eyed admission by Allison about how proud she was to tell people who asked her where she learned to play guitar that her sister taught her.

Sunday Morning Gospel Hour – It’s always challenging to get the crowd into the groove early on Saturday or Sunday. One strategy is to follow the traditional route and put on an old time revival performance. The Peter Rowan Bluegrass Band hit this dead center featuring a lot of 50’s and 60’s bluegrass from the likes of the Stanley Brothers and Bill Monroe. The other way is to schedule Trombone Shorty & Orleans Avenue. They had the entire crowd at Star Stage up and on their feet dancing 10 minutes into the set. Pity any band that has to follow those guys.

Best Retro Moment – A big, free music festival in Golden Gate Park in San Francisco just begs some comparisons to hippies and Summer of Love and flower children. The crowd for 7 Walkers, featuring the Grateful Dead’s Bill Kreutzmann, was certainly a throwback to that era. Tie-die, Birkenstocks, and “alternative” brownies and cookies were ubiquitous. And musically, the Walkers have few peers. But given the setting, it’s just too easy to play to that crowd. So I have to give this award to Fountains of Wayne and their 70’s medley vamp of Boston, Foreigner, ZZ Top, etc., in the middle of Stacy’s Mom. It was so unexpected, and so well done, you couldn’t help but grin and sing along no matter how embarrasing it was that you still remembered the lyrics to those songs.

Tightest Sound – I know I’ve said this before, but the best rhythm section is Americana music today has to be the combination of Lisa Pankratz on drums and Sarah Brown on bass. They can lay down a groove that’s transcendental. Add to it Cindy Cashdollar on dobro, pedal steel and slide, and Dave Alvin himself on guitar and it doesn’t get much better. But this year they were outdone by The Dukes of September, a super group featuring Donald Fagen, Michael McDonald and Boz Scaggs. They not only ripped their own classics, but also hit numbers from The Band, the Dead, and Bo Diddley. What really put it over the top, though, was the vocals from Cat Russell. I wasn’t familiar with her, but I’m a fan now.

Best Live Set – OK, yeah, this sounds like I’m being redundant, picking the best live set at a live event. But live sets always fall into two categories; playing songs from their recordings as true as possible to the recording, and playing songs true to the moment. This is the latter category. Jenny Lewis and Jonathan Rice did a great set with songs from each of their catalogs and a special appearance from Elvis Costello. But the version of Love Hurts was what it must have sounded like the first time Emmylou and Graham sang it. It was just magical. For my money, though, The Band of Heathens set topped it. With 3 members of the band playing lead guitar on several songs it was an instant revival of Southern Rock from 30 years ago, even though it was all original Heathens material. It’s easy to see why they’re frequently voted Austin’s best live band.

So all in all it was an excellent 3 days of music, and if you can stand the crowds there’s not a better place to be the first weekend in October.