Running on all cylinders. In the groove. Hitting the sweet spot. All are descriptors about when everything comes together and suddenly the sum is greater than the parts. They’re also good descriptions of the latest album from the queen of San Marcos, Texas, Terri Hendrix. Her latest release, Cry Till You Laugh, with long-time collaborator Lloyd Maines, has a combination of songwriting and instrumental prowess that just seems to match perfectly with Terri’s vocal range and ability. 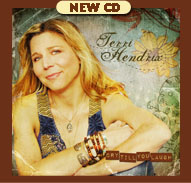 Her twelfth album started as a jazz project, but morphed into something more akin to a jazz attitude set to music. There are several songs that would be perfectly at home on a Blue Note album. Automatic, for example, has a smoky jazz lounge kind of feel, with a chorus line that’s hard to get out of your brain (…automatic, democratic, chromatic, acrobatic, southern blues…). You Belong In New Orleans is a serious swing number, complete with scat singing and those muted Bourbon Street horns and a wailing clarinet. Take Me Places is also heavy with scat singing, but is presaged with Whatachoice that’s a dialog about ordering a cinnamon roll at the drive up. Don’t ask me how, but back-to-back it just works.

That attitude I mentioned earlier manifests itself in a couple of numbers that are sort of beat poetry set to music. Folk rap, if you will. Wail Theory comes from the a poem by Dorothy Parker, while Come Tomorrow is a Hendrix original but adds steel guitar and blues harp, influenced by Charlie Musselwhite and Norton Buffalo, to the verbal dance. The harmonica also makes a strong appearance on Hula Mary, a quirky (she’s got a hula hoop, and knows how to use it) and fun song. And for just an overall musical arrangement I find compelling, check out the neo-Balkan feel of The Berlin Wall.

With those dozen albums under her belt and the incomparable production of Maines, Hendrix has never been someone easily categorized. Cry Till You Laugh stretches her boundaries even further. She notes this record is a little like a mix tape, and maybe that’s the best description for the synergy of sound, words, and production that make this her best album yet.