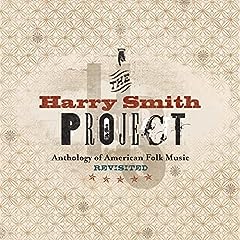 “My dream came true. I saw America changed through music.” As a Grammy Awards audience acknowledged his genius, a frail Harry Smith, months before his death, basked in the recognition that had eluded him for a half century. The importance of his landmark Anthology of American Folk Music cannot be overstated: it is often credited with spawning the 60’s folk revival, revitalizing fading legends (Mississippi John Hurt, Blind Lemon Jefferson), inspiring budding legends (Pete Seeger, Bob Dylan, Led Zeppelin), and perserving slices of American culture before they could be doomed to legend.

BACKGROUND
Painter, musicologist, filmmaker, anthropologist and eccentric, Harry Smith is best known today as a maverick record collector. In the early 1900’s, before record collecting for cultural edification was widely practiced, he amassed an archive of tens of thousands of, mostly 78 rpm, records — treasures that would have been discarded, literally, if not for his passion. At a time when the war effort demanded records be melted for shellac, Harry Smith raided record shops and rescued folk, blues, cajun, old country, hillbilly, gospel, jazz and other precious artifacts of Americana.

His collection wasn’t the biggest, but it was well curated — not just a pile of discs, but a museum of songs which were thoroughly researched, annotated and numbered. Unprecedented for its time, it caught the eye of the newly formed Folkways Records. In need of cash, Harry Smith sold half his collection to Folkways (the other half was eventually sold to the New York Public Library) with the understanding that the songs would be issued to the public with his annotations.

From thousands of tracks, 84 were chosen, carefully sequenced over 6 LP’s, and the Anthology was born. Released in 1952 to modest fanfare and worse sales, the quirky box slowly invaded America’s consciousness. Fifty years and 500,000 copies later, the collection is a national treasure; it was the first album added to the White House record collection, and it was added to the prestigious National Recording Registry in 2005.

50TH ANNIVERSARY
The enduring legacy of the Anthology is best demonstrated by the legions of musicians who claim indebtedness to Harry Smith. As the 50th anniversary of the 1952 event unfolded, contemporaries of Folk, Alt-Country, and Modern Rock performed selections from the 84 tracks in a series of recorded concerts in London, New York and Los Angeles. A souvenir box from the three concerts was released by the Shout Factory in October.

The 2-CD, 2-DVD set is a sprawling assortment of concert clips and film, with enough treats to delight old fans and a hipper, modern styling to attract some new ones. Disciples of Harry Smith will be drawn to the DVD content, especially “The Old, Weird America,” a brand new documentary which explores the origins and impact of the Anthology. It provides an insightful history and features rare footage and reflections from Greil Marcus and Alan Ginsberg. Essential viewing for the indoctrinated.

The concert clips, on the other hand, are as likely to please a younger audience as they are to confound the committed fan. By charter, the Anthology reveres the past, and the performances that stick to “the formula” are the most satisfying: Richard Thompson’s take on Clarence Ashley’s Coo Coo Bird is a studied performance (and a treat to watch him perform on the DVD); Beth Orton’s Frankie (Mississippi John Hurt) is stark and terrifying, like a murder ballad should be; Steve Earle’s Prison Cell Blues (Blind Lemon Jefferson) is just plain fun; and Van Dyke Parks loving orchestration of the Social Music instrumental, Sail Away Lady, is worthy of the 1952 box.

That describes about 65% of the collection; the remainder is contemporized and electrified. Traditionalists may wince at some of the tinkering: Nick Cave’s John the Revelator bears little resemblance to the humble handclaps and a capella of Son House; Lou Reed’s charged See That My Grave Is Kept Clean is a grungy revision; and Sonic Youth’s smoldering Dry Bones is practically a reinvention. These songs were birthed in fields, in churches and on front porches, so the high voltage arrangements can be intriguing, but jarring to the stubborn ear.

CONCLUSION
Harry Smith’s Anthology of American Folk Music changed America through music, and the Harry Smith Project Revisited ushers those ambitions into the 21st century and appeals to a new generation to broaden its milieu. Like Dylan’s Bringing It All Back Home, some like side one, some like side two, but no one questions its impact. So whether it’s the old or new, weird America you prefer, one of these compilations should be in the collection of the serious Folk music devotee.