It was two years ago at the unofficial Sunday night South-by closing ceremonies at the Continental Club that Alejandro Escovedo world premiered his then-forthcoming album, Real Animal live and in sequence from the first track to the last. It was a remarkable show, and it proved to be an album that raised Alejandro’s profile considerably, no doubt in part because it was yet another excellent album of songs from one of our most cherished songwriters and performers, but perhaps largely because so much of Real Animal rocked, which is a milieu that Alejandro has only occasionally chosen to fully embrace on record as a solo artist.

During the thick of South-by on Friday evening last year, Alejandro reconvened his Orchestra for the first time in 10 years, and that show was beyond remarkable – it was truly one for the ages. That show didn’t take place at the Continental Club but in the lot behind Jo’s Coffee in South Austin during the South by San Jose (SXSJ) party because, frankly, the entire 15-piece Orchestra simply couldn’t have fit on the stage at the Continental Club, though a goodly portion of the Orchestra did indeed join (or guest) at the Sunday night show at the Continental last year.

So what could Alejandro do to top himself this year but combine some of the best elements of both of those two astonishing shows from years past? Well, that’s exactly what he did, bringing the entire Orchestra, albeit now curiously devoid of a string section, but featuring the otherwise “standard” band augmented by a keyboardist, a 4-piece horn section and 3 dedicated backup singers performing a set which included 9 songs from his forthcoming album, Street Songs of Love, which is due in June and sounds as if it’s going to be another barn-burner.

As it happens, the above description also applied to the Friday night performance by Alejandro and the Orchestra, which again took place at SXSJ during South-by proper, but bringing the entire Orchestra to the Continental Club on Sunday was an historic event. That wasn’t the only history that was made at the Continental Club on Sunday night though, as Alejandro saved the biggest surprise for last. Making good on a promise that was made in the same venue 6 or 7 years ago, after the main set had concluded with a typically gorgeous rendition of the Rolling Stones’ “Sway,” Javier Escovedo and Jon Dee Graham joined Alejandro and Hector Munoz for, you guessed it, a True Believers reunion.

But I’m getting ahead of myself. Let’s back up and revisit Alejandro’s set from the beginning, shall we?

The set kicked off with the horn-driven arrangement of “Always a Friend” that was premiered at last year’s SXSJ event, setting the table as perfectly as it did as the opener at the SXSJ show both this year and last. It was just incredible to experience this delirious, Orchestra-bolstered arrangement of such an already delirious song in the intimate confines of the Continental Club.

Next up was the first of the 9 selections we would ultimately be treated to from the forthcoming album, appropriately kicking off with “Anchor,” the first track on the album. “Anchor” is an incredible, and incredibly anthemic rocker, and as it felt absolutely of a piece with “Always a Friend,” paired brilliantly with it’s predecessor in the opening pairing of the show. One lyric that I scrawled in my notebook was, “if love is a ship, I’d pull your anchor and hold on.”

“Anchor” was followed by another of the new songs, but unfortunately it’s not one I can definitively identify based on the since-released track listing from the album. It featured a chugging beat somewhat akin to “Everybody Loves Me” though, and if I’d had to guess at the title, I’d have guessed, “This Ain’t Love.”

After this third selection, Alejandro mentioned that, as with Real Animal, he “wrote a lot of these songs with Chuck Prophet,” who had played a set with his band earlier in the evening, but who didn’t end up joining the band during Alejandro’s set as he had in 2008.

“Silver Cloud,” another of the new songs, was up next and just as with the two we’d already heard, it was another rocker; in the case of “Silver Cloud,” a rocker that really swings.

For the fifth selection, Alejandro took a break from the new material to dedicate an indescribably gorgeous and completely different, almost funereal arrangement of “Sister Lost Soul” to Alex Chilton. Absolutely gorgeous, and absolutely wrenching.

Next up was a searing “Chelsea Hotel” which, in a nod to two of the performers who’d played earlier on the Alejandro Escovedo & Friends bill, Alejandro said, “goes out to Lenny Kaye and Ivan Julian tonight”

We returned to the new material for the seventh song of the set, with “Street Songs” itself. Alejandro mentioned that the album was “about this area,” specifically referring to South Austin and the area surrounding the Continental Club. “Street Songs” was the first of the new songs that wasn’t a full-on rocker, but more of a mid-tempo number, albeit one with a big chorus in the live-with-the-Orchestra environment. “Street Songs” was also the only recording from the show that I could locate on YouTube, and here it is for your enjoyment:

“Down In The Bowery,” the fifth new song of the set, was explained by Alejandro as being about his 17-year-old son, Paris Diego, the lead singer in a punk band who has said of his dad’s music that it’s “old people’s music … old music for old people.” Ouch. Alejandro went on to say that the song is called “Down In The Bowery” because, “the Ramones are [Paris Diego’s] favorite band, and because I love the Ramones as much as he does.” With that introduction, you might reasonably expect the song to have been a rave-up, but in fact it was a gorgeous, multi-layered ballad which began with just Alejandro and his acoustic guitar before the rest of the band came in, with the backup singers drenching the song in beautiful harmonies to accompany the equally beautiful muted horns, building to a big finish.

Next up was “Tender Heart,” another new one, and one which you might expect to be a ballad based on the title, but was a full-on rave-up with a dirty ’70s sounding guitar line throughout. One lyric I scribbled down was, “I got a dream, do you wanna be in it?”

The seventh new song of the night was up next, but it was unfortunately another one I can’t put a title to. My guesses were “It Ain’t Easy” or “Didn’t We Now,” but since neither of those come close to matching any of the song titles on the forthcoming album, it’ll have to remain a mystery for at least a little longer.

“Everybody Loves Me” was next, and featured a positively huge sound, powered by the horn section and including choice solos on both trumpet and tenor sax. The arrangement smoldered at first then exploded into positively apocalyptic mayhem. Unquestionably the finest version of the song I’ve ever heard, this arrangement and performance was positively epic.

Introducing the band, Alejandro mentioned that the band (the core band, that is, not the Orchestra) has been dubbed “the Sensitive Boys,” which certainly works for me.

The eighth new track was next, “Faith,” which included the lyric, “you gotta have faith in the one that you love,” and which sounded like a delicious blend of a Stax-Volt style scorcher and an Exile on Main Street outtake.

Before the Orchestra returned for an encore, Continental Club owner Steve Wertheimer mentioned from the stage that Javier Escovedo and Jon Dee Graham were backstage, teasing the crowd with the potential of an historic True Believers reunion. When the band returned to the stage, Alejandro picked up the tease, saying, “we’re gonna do a couple songs for you before we do … something else.”

The encores began with the ninth and last of the new songs we’d be treated to on this glorious night in Austin, and it was another gorgeous ballad; stately, and featuring guest Carrie Rodriguez on violin. Unfortunately, it’s another of the new songs I can’t put a title to but, for what it’s worth, my best guess at the time was, “The Original Sin.”

The show-proper concluded with Grady joining the band for the aforementioned typically gorgeous version of “Sway,” featuring the very cool sight of Alejandro actually conducting the horns through the final passage before taking his leave of the stage in advance of the rest of the band, each leaving according to their instrument, with individual players leaving the stage and dropping out of the music until only the three backup singers remained … until with a final, “woo woo woo” from them, the show-proper came to a close.

The True Believers took the stage next, and Steve Wertheimer returned with them for the official introduction, accidentally referring to them as “Buick Mackane” before correcting himself. Ooops.

Alejandro then spoke the words that sent an electric charge through the audience: “So here we are again. I’m pretty sure this is where it all started too … might as well end here. We were once the True Believers a long time ago.” 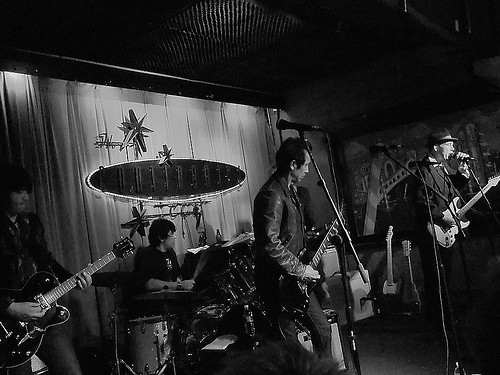 The True Believers then treated those fortunate enough to be in attendance at the Continental Club to a 4-song encore performance to end the night (and South-by), beginning with a blistering “She’s Got,” featuring Javier, Alejandro, and Jon Dee lined up as a murderer’s row with electric guitars blazing. “The Rain Won’t Help You When It’s Over” was up next, and the True Believers’ hit sounded epic, a roaring anthem. The third song of the mini-set, “Lucky Moon, was a barn-burner, and one that I’m pretty sure broke the sound barrier in the Continental Club at that. Concluding the set, and the show, was an absolutely thunderous cover of the Velvet Underground’s “Foggy Notion.”

And if some were some churlish enough to gripe that their favorite True Believers song wasn’t included among the historic four-song mini-set (“Rebel Kind,” and yes, I’m ashamed to have to plead guilty to the charges, but, I mean, come on, how do you not play “Rebel Kind”?!!), such ingrates really ought to bear in mind what a gift they’d just been given and been thankful for what they (and when I say “they,” I mean I) did get. That it happened at all was fantastic. Thanks to Alejandro, Javier, Jon and Hector for an unforgettable conclusion to an already unforgettable evening, capping yet another unforgettable South-by as only “Alejandro Escovedo and Friends” at the Continental Club can.