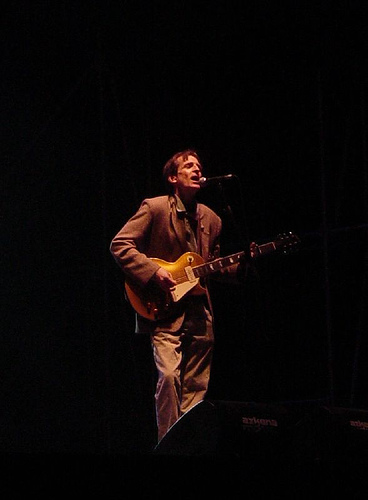 I don’t think it would be overstating the case too much to say that when the news of Alex Chilton’s death broke on the first day of SXSW, so too did the collective heart of a sizable percentage of SXSW attendees break. I got the news via text message during the second showcase of the night on Wednesday, and desperately hoped that it was a sick joke on the part of the sender. Pretty much all of my friends who were in Austin this year had been looking forward to the Big Star showcase scheduled for Saturday night as being the icing on this year’s South-by cake since it was announced that they would be playing. Getting the news of Alex’s sudden death, which was received some 72 hours before he was scheduled to take the stage at SXSW with Big Star was like getting sucker-punched by, well, let’s use the words of Mark Twain, another great American writer from the South… by a malign thug.


At the time I received that fateful text message, I was seconds away from seeing a sprightly synth-pop band and, after receiving independent confirmation of the heartbreaking news, I started to not only feel numb, but also completely out of phase with what suddenly felt like completely inappropriate music to be listening to. When the band in question began to play a cover of the Bee Gees’ “Stayin’ Alive,” the bitter irony suddenly became too much for me to take, and I apologized to my wife (whom I’d shown the text message), and explained that this music wasn’t working for me, that right now I needed punk rock to express my sadness, frustration, and, somewhat inexplicably, anger. Maybe you would’ve chosen differently, but that was what I needed at the time, and Austin’s own Born to Lose proved to be just what the doctor ordered, with their rousing sing-along (well, shout-along) choruses taking me out of my funk for the duration of their set.


Given the fact that even though I had been seeing a pop band, but reached instead for a punk band as my chosen balm after hearing the news of Alex’s death, it will probably come as little surprise to discover that I was one of what I can only imagine were the thousands who were turned onto Alex Chilton and Big Star through Paul Westerberg and the Replacements via “Alex Chilton,” the tribute they rendered in song 23 years ago on their classic Pleased to Meet Me album. That song led to my checking out Big Star, and having led me to discover Big Star and those holy relics of power pop majesty is just one of many things (and people) in my life for which I have the Replacements to thank.

That was a magical, transformative night, and that the band debuted (two! great!!) new songs was just an unbelievable bonus. I mean, my god, we were actually seeing Big Star. Big Star! As if the set itself hadn’t been gift enough, and as we were still stumbling around the floor of the Austin Music Hall in a daze afterwards, trying to locate the jaws which had hit the floor so many times during the set that they’d been dislocated, and with most of the crowd having filed out, what happened next but Alex Chilton himself wandering out onto the floor. Did we hesitate to approach him and geek out like the fanboys we were? Please. I actually think we managed to maintain a modicum of cool, but I’m not going to ask my wife for independent confirmation, mostly out of fear that her more clear-eyed observance of the events which transpired may prove to be in conflict with the beatific glow of my memory, but one thing of which I have no doubt is that in the process of thanking Alex, I had the pleasure of shaking the great man’s hand.

OK, let’s fast forward 6 years and return to SXSW 2010 again. The word went out on Thursday that the Big Star show scheduled to take place at Antone’s on Saturday would indeed go on, only it would now take the form of a tribute show, with a host of (unannounced) vocalists joining Jody Stephens, Jon Auer and Ken Stringfellow to pay tribute to the fallen hero. I had some initial reservations about attending under the circumstances, but all of my friends were still planning to attend, and the event promised to be something special, and special is exactly what it was.

The evening began with Jody Stephens making some heartfelt remarks, thanking the music community for their “outpouring of love this week” before introducing Heather West, who read aloud from a touching letter which Alex’s widow, Laura, had written for the occasion.

Following the recitation of that letter, Alex’s bandmates bravely launched into what had to be an incredibly difficult set for them to play, beginning with “Back of a Car” featuring Jon Auer on lead vocals. Next up was the first guest of the night with Curt Kirkwood of the Meat Puppets joining on guitar for “Don’t Lie to Me,” followed by his taking lead vocals and guitar on “In the Street.” The guests continued with Chris Stamey coming out next to play guitar and lend his backing vocals to “I Am the Cosmos,” followed by his doubling of Jon Auer’s vocals as well as playing lead guitar on “When My Baby’s Beside Me.”

The special guests kept coming, with M. Ward up next to lend his lead vocals and acoustic guitar to what might have been the most perfect marriage of guest performer to material of the night on “Big Black Car.” Here’s a taste of the performance, courtesy of NPR Music:

Next up was something even more special though, as original Big Star member Andy Hummel was brought to the stage to join the band on lead guitar as Jody sang lead vocals on the classic Hummel composition, “Way Out West.” That stunner of a moment was followed by Ken Stringfellow fronting the band on “Daisy Glaze,” and then Mike Mills was brought out to sing lead (but not play) on “Jesus Christ.” Next, Jody led the three core band members in “For You,” which was followed by one of the absolute highlights of the night as John Doe joined the band on lead vocals and acoustic guitar for an stunningly gorgeous version of “I’m In Love With A Girl”:

Just as we were recovering from that, Sondre Lerche was brought out to front the band on another stunner, “The Ballad of El Goodo,” which he just totally inhabited:

Jon Auer took over on lead vocals for “Thirteen” next, followed by Ken Stringfellow singing lead on (and killing with) “Feel” before the next guest was brought up in the form of Chuck Prophet, who played lead guitar and sang lead vocals on “Thank You Friends.”

Looking every bit as beaten down by the grim reality of Alex’s passing as the rest of us felt, Evan Dando was the next to take the stage, acknowledging the crowd’s applause and then, in just one perfectly intoned syllable managed to encapsulate what we were all feeling that night: “Fuck.” Dando went on to perform “Nighttime” solo, accompanying himself on acoustic guitar.

The core band members returned to the stage next, with Amy Spease joining to sing lead vocals on “Try Again,” and with Evan Dando also lending his vocals to sing harmonies and doubling Amy on the final verse of the song. The night came to an end with the core band members joined by Susan Cowsill and the Watson Twins to sing a rousing version of (what else?) “September Gurls,” with Mike Mills joining on harmonies, and also featuring Andy Hummel on guitar.

And with Jody Stephens’ closing remarks, thanking the assembled faithful and saying, “you’ve wrapped your arms around us, and we appreciate it,” South-by-proper drew to a close on a somber, yet ultimately spiritually uplifting note.

With thanks to SXSW for providing the complete set list, handily annotated to include the special guests, here it is from Jimmy’s post on the official site:

Twangville gratefully acknowledges Karen Hoffmann for the use of her Alex Chilton photo.