Some of you may recall the thrillingly eye-opening experience that seeing Totally Michael at South-by was for me last year. Well, if you’re willing to indulge me, I think I’m about to test the patience and credulity of the Twangville audience like never before. (Bear with me though, for as with my South-by blogging of previous years, my coverage will conclude again this year with a report from Twangville fave Alejandro Escovedo’s legendary set at the Continental Club on Sunday night.) You see, that Totally Michael record continued (and continues) to brighten my world over the past year, and it has also proven to be communicable, leading me to discover a previously unknown-to-me genre that I suspect most would refer to as “emo pop,” but which I’ve affectionately christened “indie pop rocks.” Consisting of a confectioner’s combination of sugary sweet hooks (and, often, harmonies), frequently mad beats, occasional electronic bleeps and bloops, utterly earnest delivery, and through-the-roof energy, it’s a style that I’ve found myself powerless to resist. As I recently warned friends when confessing this latest musical addiction, however, given these primary ingredients, “indie pop rocks may rot your teeth.”

Anyway, one day last summer, based on the presence of Totally Michael in my collection, iTunes recommended to me via the Genius feature a band called Teen Hearts. Now, I had never previously followed through with checking out a Genius recommendation, but boy, am I ever glad that I chose that particular occasion to do so. Did I fall for Teen Hearts in an, ahem, heartbeat? Yes, I did. Did I listen to their wonderful Heart Beat EP near-incessantly for months thereafter, driving my wife up the proverbial wall in the process? Yes, I did. Was I, good husband that I try to be, able to curb my Teen Hearts addiction while in my wife’s presence thereafter? Alas, oftentimes, no, I was not.

Neither Totally Michael nor Teen Hearts played South-by this year though, so why do I mention all this? Well, when I heard a song called “Heads Up, Hearts Down” by I Fight Dragons on the torrent of SXSW 2010 performing bands, I felt a rush that was very similar to the one I felt when I first heard Teen Hearts. (You may notice the recurring instance of the word “heart” appearing in song titles –and, indeed, band names– in the indie pop rocks genre; this is, I suspect, not at all coincidental, as these bands tend to craft heart-on-your-sleeve songs celebrating the twin joys of both love and life with the unbridled earnestness of youth. To me, these are key components of the genre’s irresistible charm.) I had been bingeing on listening to “Heads Up, Hearts Down” for the better part of a week before I started putting together my schedule for this year’s South-by when, to my horror, I discovered that I Fight Dragons weren’t on the schedule. Turns out they weren’t playing after all. Heartbreak city!

How did I cope? Well, first I checked eMusic to see if the band had a record out and, happily, it turned out they did indeed have an EP (featuring “Heads Up, Hearts Down,” naturally), so I bought that sucker on the spot. While I was downloading it, I noticed for the first time that eMusic had their own version of Genius recommendations called eMusic Album Recommendations, so down that rabbit hole I went, checking out the suggested related bands. I quickly found a bunch more examples of what I would soon come to think of as indie pop rocks, and the first of these new discoveries was Stereo Skyline. Now given that, at the advanced age of 40, I’m not even remotely close to their core demographic, and though I realize that in some respects I probably should be, I’m not at all ashamed to say that I fell really hard for Stereo Skyline, and most especially their song, “Heartbeat” (yes, again with the hearts… it’s an occupational hazard with indie pop rocks), and, oh joy, they were playing South-by! 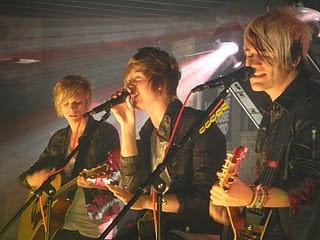 As it turned out, I ended up seeing Stereo Skyline twice in a single day (something I don’t think I’ve done at South-by since falling for the Cribs back in 2006), and this ended up being especially rewarding since they “had” to play acoustic at the Pure Volume House where I caught their brief afternoon set on Thursday. (Which, by the way, was the first set I saw after leaving the Yorkshire party, so I was having a pretty great afternoon.) It was a treat to discover that Stereo Skyline’s hook-laden songs totally hold up in an acoustic setting – the true test of a great song, as I think most would agree. It was a gimme that the harmonies would hold up, and boy, did they ever. Along with some new material from their forthcoming album, Stereo Skyline played one cover in their set, the Foundations’ “Build Me Up Buttercup,” and it was the perfect choice. Funny story: before playing “Build Me Up Buttercup,” and without identifying the song they were about to play, frontman Kevin Bard asked the largely teenage crowd if they would sing along with the next song, noting that at some shows the crowd eagerly agrees to do so and then drop the ball when the time comes. The crowd at the Pure Volume House acquitted themselves admirably for the most part, but given the fact that the song is some three decades older than their core audience, most of their fans have probably never even heard the song! 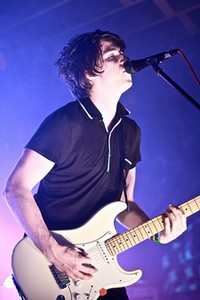 Cameron Leahy of the Downtown Fiction at SXSW 2010

I planned on catching Stereo Skyline’s electric set at their showcase that night (of course), arriving at the venue just minutes before their scheduled start time. As was frustratingly the case throughout this year’s South-by, however, the schedule was off, and the Downtown Fiction, the band scheduled to go on before them had just started their set. Since they hadn’t provided an mp3 to SXSW, I hadn’t heard the Downtown Fiction before, but here’s where the frustration of a slipped schedule turns into South-by magic: I loved them, and they were (surprise!) cut from the same sugary bubblegum indie pop rocks goodness as Stereo Skyline. The Downtown Fiction unleashed one hook-laden pop gem after another, and by the time they played their set-closer, the especially irresistible, “Living Proof,” I was completely sold. Imagine my surprise when I discovered, upon returning home after South-by and seeking out their recorded works, that they’re from the very town in which I live, Fairfax, VA. Who knew Fairfax rocked?!! Looks like it may be a while before I see them again though, as they’re booked for both the Bamboozle and Warped tours this summer. Well, there is an upcoming show at the local Hot Topic (no, I’m afraid I’m not kidding), but I have to draw the line somewhere as my musical tastes expand to apparently include those of a teenage girl, and going to the same Hot Topic that hosted the stars of Twilight: New Moon a few months ago is where I’m going to have to draw that line, thankyouverymuch. A man gotta have a code, after all.


Here’s a taste of the Downtown Fiction, performing “Is Anybody Out There?” earlier that same day at the Pure Volume House:


Stereo Skyline were up next, and they didn’t disappoint in the electric setting either, with the bassist coming off as the reincarnation of a teenage Tommy Stinson from his early days in the Replacements, with both onstage antics and punk spirit. If the band came off with an admittedly slightly unsettling “packaged” feel, as if their vaguely matching outfits, feathered blond locks, and apple-cheeked good looks might have been assembled in a laboratory as the leading edge of a new wave of boy bands for the new millennium (or a punked up Jonas Brothers), their songs remained as bulletproof as the “Build Me Up Buttercup” cover which they also included in the set at their showcase, and which is a song that’s perfectly of a piece with their originals, perhaps most especially their set-closing pop confection, “Heartbeat.”

Here’s a performance of “Heartbeat” from a couple of days later at Emo’s:

I had already intended to stick around for the next showcasing band in the venue, based on my love of their mp3 from the torrent, a little gem called “Stays Four the Same” by the Ready Set. 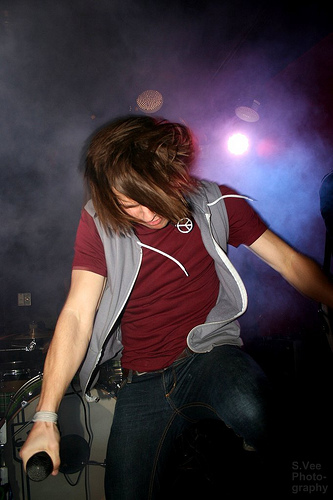 Funny thing is, much as I loved that song, I hadn’t thought of it as necessarily being in the indie pop rocks mold, but once the band took the stage, I knew I was in for not a pair but a trio of indie pop rocks. What I couldn’t have seen coming, and would never have predicted, especially given how much I had been looking forward to Stereo Skyline, was that the Ready Set would steal the show and top their mates on the bill with a positively electrifying set of indie pop rocks songs played at warp(ed) speed. Even the one original that I knew, “Stays Four the Same,” was amped up to an extent that almost transformed it into another song entirely .. and it was awesome. Similarly, they included in their set what was certainly a contender for Most Unexpected Cover Song at South-by when they played an over-caffeinated version of Wyclef Jean’s “Sweetest Girl,” completely making it their own in the process. Which is to say that, as with the originals in their set, it sounded like a rush of blood to the head in a body stippled with goosebumps and with a heartbeat furiously attempting to keep pace with the music.


In other words, it felt like the best parts of life itself.


Here’s a representative performance of “Stays Four the Same” from last summer in NYC: