Foxy Shazam perform in Richmond, VA a week after SXSW

I first heard (and heard of) Foxy Shazam this past January when their song, “Bye Bye Symphony” was included in the free SPIN magazine compilation, SPIN Presents 2010: A Look Ahead. I liked that song very much, and certainly enough to earn them a “see them at South-by” designation. That decision took on added urgency when SPIN dropped their SPIN Presents AUSTIN POWER: Best SXSW Bands 2010 comp the week before South-by, including another Foxy Shazam track, “Oh Lord” … and this one was a flat-out stunner. Yes, I now know that Foxy Shazam have been around for several years now, and that I apparently missed them when they played SXSW two years ago. And yes, they’ve already got two indie albums to their credit (though the debut is out of print), but their major label debut drops next week, so calling them the best “new” band of South-by 2010 may not be entirely apt (though I hope it’s not quite as embarrassing as when the lame ass Grammys give a Best New Artist award to artists who’ve been around for a decade, is it? Wait, it is? Argh!), but they were certainly the best, most exciting new-to-me band at South-by 2010.


Even though I arrived late to this particular party, I hope that my unbridled enthusiasm for the manic energy and irresistible melodies of Foxy Shazam will at least merit something by way of making up for lost time. Appropriately enough, given that it was SPIN that I had to thank for introducing me to the band, I caught Foxy Shazam’s set at the always-excellent SPIN party at Stubb’s on Friday afternoon. Foxy Shazam were the first band of the day to take the main stage, and I kind of feel sorry for all of the bands that had to follow their set. (Courtney Love headlined the SPIN party with her newest incarnation of Hole, and I feel especially sorry for her, because she had to directly follow Foxy Shazam at their showcase in a much smaller venue later that same night). By the time Foxy Shazam left the stage, following frontman Eric Nally’s own dramatic exit in which he clambered up a lighting rig, and from there to the roof, executing a few of his sinuously signature dance moves, then literally going over the wall, I’d like to say that they’d won over the entire crowd, but since I can only speak for myself with authority, I’ll just say that they’d earned at least one new dedicated evangelist in yours truly.


But I’m getting ahead of myself, which has proven to be a habit of mine when I’m besotted with a new musical discovery. In keeping with the overexcited attempts I’ve made to describe to friends and colleagues the sublime magnificence of Foxy Shazam’s performance, I’ve come to realize that it’s a struggle to do them justice in mere words, and I ultimately realize the impossibility of succeeding in doing so, and resort in the end to sending a link to one of their videos with the instruction that, “you just have to see and hear it to believe it.” 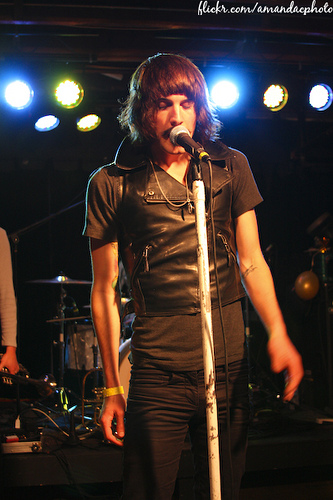 Before I resort to that, however, I will attempt to bear witness to what I saw at Stubb’s during their astonishing South-by set. First, I’d have to say that a large part of the immense appeal of Foxy Shazam lies the fact that they present rock ‘n’ roll as pure spectacle, and deliver it in a gloriously over-the-top manner that is as pleasantly devoid of even the merest hint of irony as it is absolutely full-to-bursting with unbridled energy. Of course, it should go without saying that such a performance is utterly thrilling to behold.


Their sound? Well, it’s clearly rooted in the classic rock of the ’70s, and there’s certainly more than a passing familiarity with cock rock riffs, but ultimately their sound comes across an exhilarating mashup of Queen, Meat Loaf, and the Rocky Horror Picture Show (albeit, however paradoxically, wholly original at the same time, which is no doubt partly attributable to Alex Nauth’s trumpet, which features prominently on most of their songs). Now, whether you’re the kind of person who reads that description and thinks, ‘yuck!’ or the kind who thinks, ‘awesome!’ will almost certainly determine how you will react to Foxy Shazam. Needless to say, I’m squarely in the awesome camp, although to be perfectly honest, I can’t say that I necessarily would have been if someone had described the band’s sound to me in such a manner, so make of that what you will.


Introducing “Bye Bye Symphony,” which includes in its chorus the lyric, “life is a bitch, but she’s totally do-able,” Eric Nally said (again, free of any apparent irony), “I wrote this next song to play for God at the gates of heaven.” I think it was during the performance of this song, which was a typically ecstatic performance, that my wife asked me, “do you know where they’re from?” Much to her apparent amusement, I quipped in response, “the ’70s?” 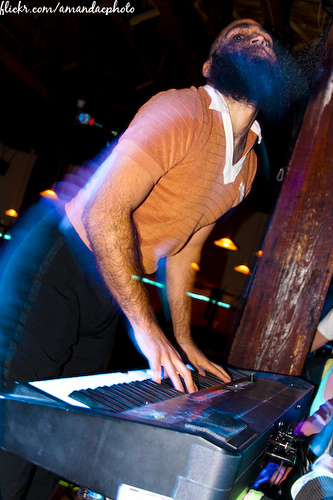 All of which is to say nothing of their undeniable onstage theatricality, most especially that of bandleader Nally and keyboardist Sky White, and is simply unlike anything I’ve ever seen before onstage. At the end of the day, all I know is that I found myself overwhelmed even as I remained in a state of something akin to disbelief at the antics that were taking place pretty much throughout their set; a perfect, and perfectly cocksure visual accompaniment to the infectious joy of the music that was being conjured onstage.


Regarding the theatricality of their performance, rather than describe the signature moves exhibited by the various band members during their performance, I am at this point going to fall back on the aforementioned video crutch and say, seriously, you’ve just gotta see and hear it to believe it. More to the point, however, and I can’t overstate this: If you have the chance to see Foxy Shazam perform live, do not pass go, and do not walk but run to your car and, Speed Racer-style, hop in, gun that sucker as if it were the Mach 5, and race to the venue.


And rather than share a video of debatable quality from their SPIN party performance at Stubb’s, I’m going to opt instead for the official video of “Oh Lord” because, believe it or not, even though it’s not a live performance, it manages to perfectly encapsulate the manic energy of the band’s live performance (and then some). Enjoy!

Twangville gratefully acknowledges amandacphoto for the use of the Foxy Shazam photos.