Ronnie Earl has become a dependable source of exceptional music every year or so. A great guitar player with an expressive instrumental voice, Earl and his Broadcasters have, over the years, embraced styles ranging from jazz to soul blues to blues-rock. Now, with Beyond the Blue Door, Earl and company have released an album that covers the styles that they do best. 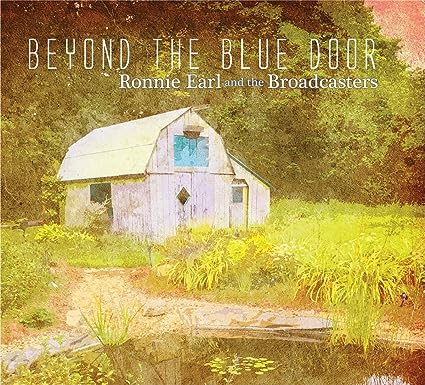 And that’s just fine with roots music master David Bromberg, who appears as a guest artist and also wrote the liner notes. The album is mature, with some gorgeous numbers, though except for the eerie, mournful “A Soul That’s Been Abused,” there are none of the 10 to 20 minute instrumental space journeys Earl was known for on albums like Grateful Heart (1996) and Hope Radio (2007). Listeners to Beyond the Blue Door will have to settle for shorter commutes.

There are some great original songs on Beyond the Blue Door, including Earl’s “T-Bone Stomp,” “Wolf Song,” the awesome “Blues for Charlottesville,” and “Alexis’ Song,” which Earl wrote with saxophonist Greg Piccolo. Like other recent releases, Earl has again included a number of tracks featuring the vocal talents of Diane Blue, not a full-fledged Broadcaster.  And, as always, on songs like “Drown in My Own Tears,” Earl plays off the keyboard talents of Dave Limina, and drummer Forrest Padgett and bassist Paul Kochanski bring their talents to the Broadcasters’ rhythm section.

But there are a number of guests that help add texture and variety to the mix. Bromberg sings and plays acoustic guitar along with Earl’s strat on Dylan’s “It Takes a Lot to Laugh, It Takes a Train to Cry.” Kim Wilson, of Fabulous Thunderbirds fame, lends his vocal and blues harp talents to Chester Burnett’s “Baby How Long” and Little Walter’s classic “Blues With a Feeling.” Piccolo, Mario Perrett and Scott Shetler add saxophones; Peter Ward, Larry Luisgnan and Scott MacDougal guitars; Anthony Geraci piano; and Michael Rush bass.