There’s a fine line between disappointment and disillusionment.  I think some of it has to do with permanence, but whatever the definition the boys in The Way Down Wanderers do a good job of staying on the fleeting side of pessimism on their latest album, Illusions.  In general, they accomplish that with upbeat instrumental support, particularly on banjo and bass, on top of some amazing 3-part harmonies.  That makes it hard to concentrate on the wry lyrical observations about life in today’s America and the effects of personal loss.

Take the opener on the CD, Principles Of Salt.  It has some great bluegrass harmonies that immediately send the mind to a bright sunny day.  You can close your eyes and enjoy that, but if you listen closely you get choice lines like “America has given up, and overdosed on Adderall.”  On Old Ford there’s a funky bass line driving a power pop tune where the road never being long enough becomes the metaphor for enjoying life.  I also liked Crooked Pines, a 70’s California country rock number that feels like it came out of the Poco or early Eagles playbook.

On several songs The Wanderers take some inspiration from roots pop stars like The Lumineers and the Avetts.  There’s a banjo and clapping sound to Moonglow Carolina that sends it to the proper place in Appalachia.  Lonesome uses similar arrangements but gets the tempo up to almost speedgrass timing.  Although the inspiration clearly came from a different direction, the rhythmic spoken word delivery on All My Words is a friendly application of pop music verses to Americana music. 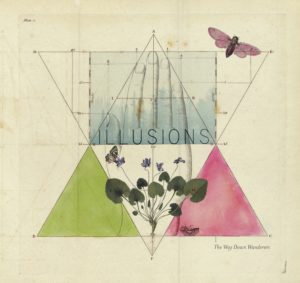 I noted that the music made it hard to pay attention to the words.  That’s certainly intended as praise–music so good you don’t hear the individual words.  That The Way Down Wanderers did this on their second album is an indicator these guys have a brilliant future.  Illusions is your chance to hear them now, because they can go in just about any direction they want.