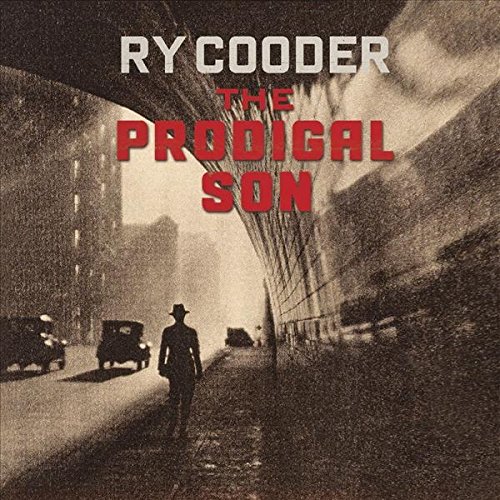 In a somber chat between Jesus Christ and Woody Guthrie, Jesus cautions Woody that the “engine of hate” that fueled Woody’s struggles last century was back again and “you good people better get together or you ain’t got a chance anymore.” That sums up how Ry Cooder paints today’s world in “Jesus and Woody,” one of the most poignant songs on Cooder’s superb new album, The Prodigal Son.

Cooder has long been a champion of roots music, and with his guitar is an important voice. As a teenager in the mid 1960s, he worked with a like-minded Taj Mahal in a band called the Rising Sons. In the 1970s he became a successful studio musician for the likes of the Rolling Stones (Sticky Fingers and Let It Bleed) and Little Feat (he played the lead guitar on the original version of “Willin’,” because Lowell George had injured his hand); meanwhile he released a series of excellent solo projects (check out Boomer’s Story, Into the Purple Valley or Paradise and Lunch).

Around 1980 he was discovered by Hollywood, doing the sound tracks for numerous movies. In the 1990s he was a member of “supergroup” Little Village (with John Hiatt, Jim Keltner and Nick Lowe) and began making forays into international music, first collaborating with Indian guitarist V.M. Bhatt on A Meeting by the River and then with Malian Ali Farka Toure on Talking Timbuktu. In the late 1990s, he traveled to Cuba, where he found a group of great musicians who had little exposure outside their homeland and recorded together with them as Buena Vista Social Club.

And Cooder’s musical populism is no surprise to longtime followers, but there is renewed intensity to his message as he looks around at his country today. Since 2005’s Chavez Ravine, which told the story of the thriving barrio that was condemned to build Dodger Stadium, he has been increasingly focused on concept albums that spotlight his progressive populist political bent. In 2007, on My Name is Buddy, he told the story of a “red cat” who leaves home to see the injustices in the world. I, Flathead, in 2008, featured an accompanying 100-page novella about a steel guitar-playing racing car driver. 2011’s Pull Up Some Dust and Sit Down was not a concept album, but it opened with Cooder’s musical diatribe about the financial crisis – “No Banker Left Behind.” 2012’s Election Special featured “Mutt Romney,” sung from the perspective of the dog Mitt Romney had reportedly carried atop the car on family trips.

The Prodigal Son was the brainchild of Cooder’s percussionist son Joachim. We can be grateful, because it is a great album. Releasing Friday, it features 11 songs, three of them originals, including “Shrinking Man,” the topical “Gentrification” (written with Joachim), and the passionate “Jesus and Woody.” There are also two Blind Willie Johnson tunes (“Everybody Ought to Treat a Stranger Right” and Cooder’s atmospheric, haunting take on “Nobody’s Fault But Mine”), as well as songs by James W. Alexander and Jesse Whitaker (“Straight Street”), Alfred Reed (“You Must Unload”), Blind Roosevelt Graves (“I’ll Be Rested When the Roll is Called”), Carter Stanley (“Harbor of Love”), and William L. Dawson (“In His Care”). The title tune is a traditional song arranged by Ry and Joachim Cooder.  Check it out below.