There’s a gritty, dirty style of music that owes much of it’s heritage to the central swath of America, whether it’s the dirt-under-the-fingernails blues from the cotton fields of Mississippi or the the soot-stained rock and roll that came out of the factories in Detroit and Cleveland.  The ranches and oil fields of the plains of western Canada are just as inhospitable to the working man, and Albertan Matt Patershuk has tapped into that vein on his latest album, Same As I Ever Have Been.

The CD starts with Sometimes You’ve Got To Do Bad Things To Do Good, an autobiographical-sounding tale of the hard choices that have to be made when a loved pet gets hit by car or a family member needs an “intervention”.  A couple of songs later, Hot Knuckle Blues is the often told story of a blue collar worker who gives his all to the company and then just gets pushed aside.  It doesn’t lay the responsibility on The Man like many a folk song would do, but instead just accepts what life hands out–a more prevalent attitude in many of the areas where I grew up.  A little further down the set list is Atlas, where the man who holds up the world is portrayed as just another working stiff with not much to show for it but a wrecked back.

Several of the songs on the record lean more to the country side of things versus blues and roots.  Memory And the First Law Of Thermodynamics is a ballad dedicated to Patershuk’s sister, killed by a drunk driver, and is undoubtedly the first folk song to use physics to explain how a person’s soul continues to provide inspiration to loved ones, “all of you floats about in the blue, you’re just less orderly.”  Blank Pages And Lost Wages is a honky tonk shuffle about trying to make a living as a songwriter instead of having a “real job”.  The title song is a fine country waltz. 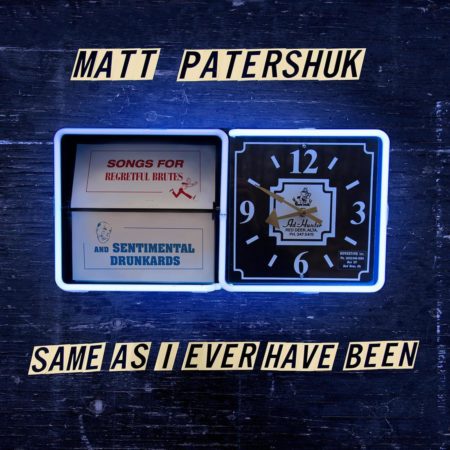 The sub-title of Same As I Ever Have Been is Songs For Regretful Brutes and Sentimental Drunkards.  That hints that all the raw emotion coming out of the songs could have turned this into a maudlin album.  Instead, producer/guitarist Steve Dawson keeps your attention with tasty licks and guest vocalist Ana Egge’s angelic sound perfectly complements Patershuk’s gravelly delivery.  The net result is one of the most fully rounded albums I’ve heard this year.