Guy Davis and Fabrizio Poggi’s Sonny & Brownie’s Last Train takes a stroll through the past, with an homage to the traditional country blues of Brownie McGhee and Sonny Terry that Davis refers to as “a love letter to Brownie and Sonny signed by both of us.” 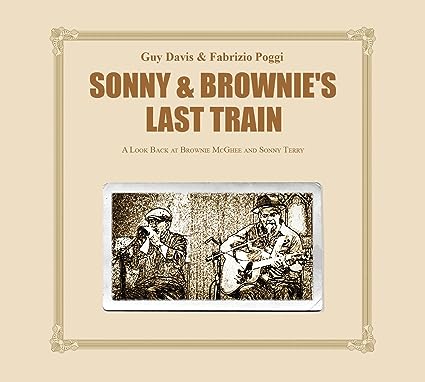 Harmonica virtuoso Terry (1911-1986) and acoustic guitarist McGhee (1915-1996) played together for so long that, as Davis explains it, “this duo of geniuses was fated to stay together as a unit even through times when they didn’t want to be.” But, as a result of their union, the pair created some timeless music.

Davis and Poggi’s homage to the acoustic blues greats features some great licks, with a selection of classic blues tunes from the likes of Terry, McGhee, Big Bill Broonzy, Big Joe Williams, and Elizabeth Cotton. For the most part, Davis, an accomplished harp player in his own right, sticks to guitar and with Poggi on harmonica. But Davis’ title tune includes fantastic call-and-response harp playing by both Poggi and Davis.

The son of actors Ossie Davis and Ruby Dee, Davis has toured the world as a singer/songwriter and acted in a number of Broadway productions. His clever song-writing and refreshing takes on others’ compositions can be heard on albums like Stomp Down the Rider (1995), Butt Naked Free (2000), Give in Kind (2002), Chocolate to the Bone (2003), Skunkmello (2006), and Kokomo Kid (2015). Italian harmonica standout Poggi has worked with many North American artists, and his work is featured on some 20 albums, including Davis’ two most recent albums, Juba Dance and Komomo Kid.