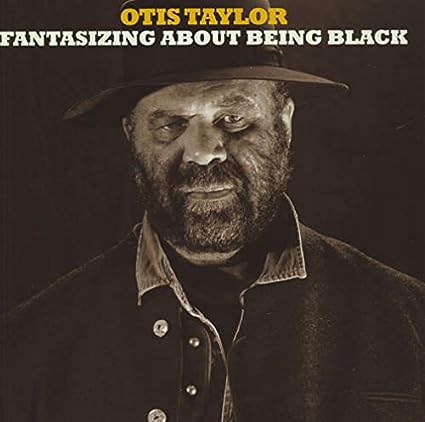 Otis Taylor is a fascinating artist.  Each of his albums, at least over the past few years, have some theme – some linkage between the songs or the listening experience Taylor is trying to create. With his Hey Joe Opus in 2015, Taylor tossed out the rule book by including Billy Roberts’ classic “Hey Joe,” made famous by Jimi Hendrix, twice on the album and Taylor’s own instrumental “Sunday Morning” three times to weave them in to a complete work, to be listened to sort of like a classical symphony, with separate movements making up the whole.

Now, with Fantasizing About Being Black, Taylor’s theme is the African-American experience in America from slave ships to more recent times. His spare, “Trance Blues” style carries the project off perfectly, creating a haunting, engaging album that is totally compelling.  The album has some great songs. A couple of songs – “Twelve String Mile,” “Walk on Water” and “Jump Jelly Belly” – are Taylor songs he recorded some years ago, but they fit here. Together with gritty, visceral tunes like “Banjo Bam Bam,” “D to E Blues,” “Just Want to Live With You Baby” and “Jump to Mexico,” the tunes create a dark picture of history. But the album is also a great listen.

Taylor’s career, like his musical style, has been unconventional. He was active in the 1970s but gave up his career to become an antiques broker in Denver for many years until friends convinced him to get back into music in 1995. After a couple of independently released albums, Blue Eyed Monster in 1997 and When Negroes Walked the Earth in 2000, Taylor recorded his early masterpiece, White African, in 2001. In 2008, Taylor produced Recapturing the Banjo, which was perhaps his first real concept album, featuring the banjo in various African-American music forms from ragtime to rock, thus “recapturing” the instrument that originally came to America with the slave trade from West Africa. Taylor’s 2012 album, Contraband was stark yet beautiful.  In 2013 he collaborated with Indigenous front man Mato Nanji on the stellar My World is Gone.