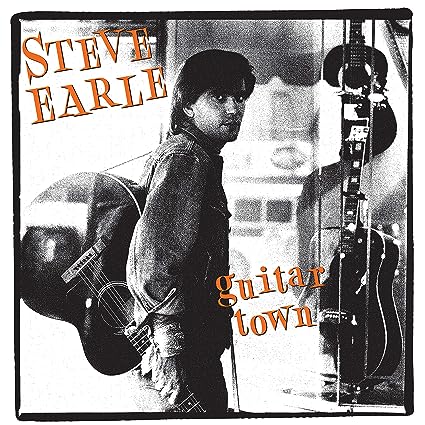 Here’s your chance to win a copy of the Steve Earle Guitar Town 30th Anniversary Collection. Read on for details!

There are few artists whose careers can be described as a musical journey. Steve Earle is one of them. Over his more than 30 year – and nearly 20 album – career he has taken us on a tour through country (especially the outlaw variety), folk, blues, bluegrass and straight-up rock & roll. Even more impressive, he has proven himself to be a masterful songwriter every step of the way.

Guitar Town 30th Anniversary Collection, the album that launched his career, is still one of the finest debuts released by any artist. “Hey pretty baby are you ready for me, yeah it’s your good rockin’ daddy down from Tennessee,” he announced to the world on the opening title track. That song, alongside “Someday”, “Fearless Heart,” and “My Old Friend the Blues” (one of my faves) are still country staples and have provided inspiration to countless artists that have followed.

To celebrate the 30th anniversary of Guitar Town 30th Anniversary Collection, MCA Nashville/UMe will be releasing a remastered version of the album this Friday. The reissue also included a previously unreleased live concert captured in Chicago back in 1986. The set list includes performances of nearly all of the tracks on the debut, plus songs that ultimately appeared on his subsequent albums Exit 0 and Copperhead Road. There’s also a cover of Bruce Springsteen’s “State Trooper.”

Thanks to our friends at MCA Nashville/UMe, we are giving away a copy of Guitar Town 30th Anniversary Collection. To be eligible to win, post a comment with your favorite Steve Earle song (whether from Guitar Town or not). A winner will be selected at random when the contest ends on Monday, 17 October 2016 at midnight ET.*

Oh, and for those in the Boston area, there will be a special tribute performance of Guitar Town this coming Sunday night (10/16) at Thunder Road. Gonna be a good time (and you can win a copy of the anniversary release there, too!).

And, to get you in the mood, here’s Earle performing “My Old Friend the Blues” at FarmAid back in 1986.