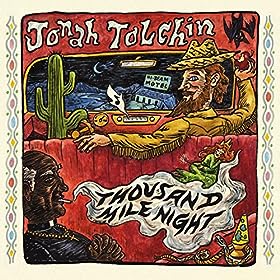 Jonah Tolchin has taken another step forward on his new release “Thousand Mile Night”. The production of the album guides Tolchin to utilize a slightly different style on each song in order to evoke the mood that supports the lyrics. The album was recorded at Fame Studios in Muscle Shoals, Alabama. However, it has only small doses of the R&B vibe that is typical of the music generated there. That is enough to augment the Blues undertones that characterize many of his songs. The result is a stylistic balance that gives it a prominent standing among a growing list of solid Americana releases in 2016.

During the recording he utilized the superior house musicians at Fame and it was a great choice. The title cut “Thousand Mile Night” is the most intriguing. It is the story of a road trip that is reminiscent of Southern Gothic literature. In fact, when he refers to the “Mississippi preacher smoking in the backseat”, one could almost imagine Flannery O’Connor herself sitting beside the reverend. In addition to the song, there is fitting cover art that brings to mind Wes Freed’s Drive-By Truckers album covers. The album starts out with a great example of his poignant songwriting. “Beauty in the Ugliest of Days” is appropriate for the current state of world and political affairs. The song is call to actively seek out beauty and not be defined by the circumstances and events that we encounter. Hope permeates a number of the songs on the album. There is the romantic hope on “Completely”, which is a reflection on rekindling a struggling relationship. There is the ecumenical spiritual hope on the lively and soulful “Unless You Got Faith”. Tolchin also makes use of the Blues delivering doses of realism as he deals with wandering and loss on songs like “Working Man Blues #22”. His strength as a singer-songwriter comes in his ability to take common themes and give them new vantage points. To that end, “Thousand Mile Night” is a collection of songs that is all about perspective. We all encounter similar obstacles along the road, but how we choose to navigate them is what defines us. For his part Jonah Tolchin seems to choose hope over despair. He makes his choice through not only lyrics but also in music that encases them.