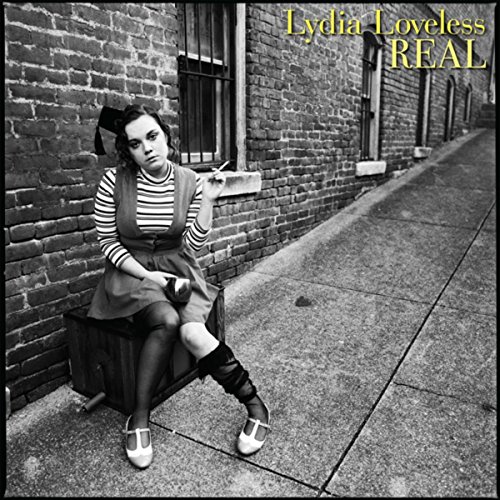 Lydia Loveless is accomplishing a feat that is all too rare in music today – markedly evolving her art while maintaining her musical identity. Give it some thought and I suspect you’ll agree that it occurs less often than one would think.

Before talking about what has changed, first let’s talk about what hasn’t – her no bullshit style of songwriting. Loveless confronts emotion directly, never pulling her punches even when the conclusions are far from clear.

In that vein it’s the ballads on Real that hit the hardest. The restrained arrangements do little to hide the heart-wrenching tales that Loveless tells. Invariably the relationships that she chronicles are fading fast and Loveless excels at capturing the conflicted emotions that occur. The mournful “Out On Love,” for example, is propelled by an ominous electric guitar (that almost sounds like it is crying) as Loveless declares, “I don’t know what the truth is but you gave me every reason to fall out of everlasting arms.”

Loveless mourns a disintegrated relationship on the sorrowful “Clumps” while pleading to revive one on “Bilbao.” “And so what if that’s all it was,” Loveless sings on the former track, accompanied solely by an acoustic guitar, “Love turns into lust and milk turns into clumps.” The latter track has an aching full band arrangement as she avows, “I know who I am and I can be like that again, if only you knew me more.”

Elsewhere are a handful of brooding rockers that find Loveless further grappling with life’s tribulations. “Longer”, the lead single, crackles with an infectious hook even as the singer proclaims “Give me just a little longer to get over you.” Although the sentiment certainly applies to a romantic loss, in this case it was largely inspired by the passing of a friend.

On a pair of gripping tracks Loveless chronicles the turmoil that someone goes through when they know things aren’t working in a relationship but are struggling to let go. Pounding drums and ringing guitars give album opener “Same to You” a gripping tension while a subtle yet captivating 12-string guitar propels the evocative “More Than Ever.” She adds to the emotional impact on both songs by occasionally speaking, or rather spitting out, the lyrics.

So what has evolved? The music. In a short period Loveless has progressed from her early country leanings to a more straight up rock (and rocking) sound. Real takes this progression further by introducing some alluring pop elements into the mix. Loveless has teased her affection for pop in recent years with her exceptional covers of Kesha and Prince. Here she finally incorporates it into her own music with exceptional results. She does this most notably on “Heaven,” which opens with a pulsing bass line before an acoustic guitar and synthesized sounds kick in.

When one considers the ground that Loveless has covered in little more than six years as a solo artist, one can only imagine the musical potential – and heights – that Loveless will find in the future.

Nothing to Fix, Jack Ingram (from the Rounder Records release Midnight Motel)

Few could argue that Ingram has paid his dues. The Texas troubadour has logged many a mile on the road while releasing more than a dozen albums since the start of his career in the 1990’s. He achieved commercial success and awards show recognition along the way but then took an extended hiatus from releasing new music.

Well, in 2016 he returns with an album whose sound reflects the way that it was recorded – on his own terms. There’s a laid-back feel to the songs on Midnight Motel, often with a good time vibe. Not a good time vibe in the saccharine pop country sense, but rather that they conjure up a relaxed late night hang with friends at the local dive bar.

The songs are perhaps a bit mellower than I expected (especially after seeing a rowdy SXSW set earlier this year), but they really shine. Ingram writes and sings with a wizened perspective, often with the voice of a man who has learned from his life experiences and is comfortable has settled into what his life has become.

Onebigachinheart, Hymn for Her (from the self-released Drive Til U Die)

They say that musicians have wanderlust but Lucy Tight and Wayne Waxing take it to an extreme. The duo, along with their daughter, live and tour in a ’61-vintage Bambi Airstream trailer. That nomadic lifestyle makes its way into their music, both figuratively and literally. Their latest album was recorded in said trailer, as well as studios in Nashville, TN and Asheville, NC.

The songs on Drive Til U Die, while anchored in a ramshackle sound shaped in part by their homemade instruments, careen across styles from dreamy pop to bluesy swamp rock. As song titles like “Sea of Croatia” and “Paraguay”, as well as “Devil’s Train” and “The Road Song” indicate, the one constant is a perpetual sense of motion. As one might expect, theirs is the type of musical journey that is only sated by continued wandering.

I’m partial to the raucous bluesy “Honeycomb” and “Shine” but it’s hard not to adore this harmonica-laced acoustic ballad. All the moreso because the album version features guest vocals from the duo’s 8 year-old daughter and a 102 year-old great aunt who passed away not long after the song was recorded.

One of the joys about Twangville – even for those of us in the Twangville posse – is discovering a new favorite artist. Arkansas-based, Ozarks-raised group National Park Radio are a welcome new addition to my musical library.

Singer-songwriter Stefan Szabo has a strong voice and a matter-of-fact singing style that focuses the attention on lyrics that crackle with depth and intelligence. He writes with an intellectual weight that belies his age (early 30s), applying his critical eye to topics ranging from religious (“Once Upon a Time”) to romantic (“Steady”).

A banjo figures prominently in the mix on most tracks. Rather than overpower the arrangements, which it is often wont to do, here it fits nicely into the band’s sound. This is especially true when it is accompanied by piano and fiddle flourishes. The resulting sound has an airy mountain quality, the kind that makes one want to be sitting in a field (or atop a mountain) watching the band jam and sing.

There’s something special about a band with multiple songwriters, all the better when they thread it all together with a distinctive harmony-driven sound. Meet Nashville newcomers the Forlorn Strangers.

Though they travel in the folky Americana realm, they really serve up tasty pop songs wrapped in a rootsy package, banjo and all. There’s a warm and relaxed quality to their debut release, making it a perfect soundtrack for summer daydreaming. They actually call to mind another band known for daydreaming – the Forlorn Strangers recall the Mamas & the Papas if that group were from the South instead of San Francisco.

Last I Heard, Flesh Panthers (from the forthcoming Willows Weep)

Like with National Park Radio and the Forlorn Strangers, it’s a Twangville treat to make a new musical discovery. In this case it came courtesy of a polite introductory email from the band. I gave the sample track a listen and was immediately hooked.

The Chicago-based group call to mind some of the 1960’s finer moments when garage rock sound was wrapped around pop melodies. Think the Kinks, the Standells and even the Velvet Underground in their more rocking moments. They do so, however, with a nice contemporary vibe.

After giving the album a listen I’m ready to see the band perform live. Willows Weep is such fun listening, I can only imagine the enthusiasm that they bring to the stage. So how about a Boston visit, fellas?