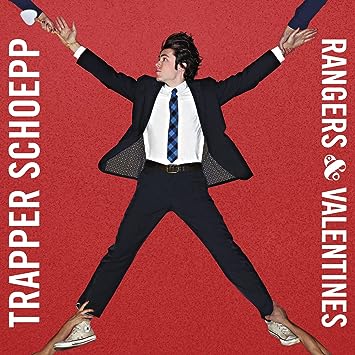 When was the last time that you heard an infectious song about mononucleosis? I can’t recall either but Trapper Schoepp demonstrates that it can be done. The lead-off track to his latest release crackles with energy, driven by an irresistible pop hook and emboldened by rousing horns. “You’re the one I shouldn’t have kissed,” he sings, “I’m the one you won’t miss.”

You’d think that it would be hard to keep up that kind of momentum across an entire release. Schoepp proves otherwise, packing his latest release with rousing power pop anthems. He scratches the cowbell itch on the glorious “Settlin’ or Sleepin’ Around” while “Don’t Go” sets the wonderful gospel-tinged vocals of the McCrary Sisters against a pulsing rock beat.

Schoepp pays homage to Bob Dylan with “Talking Girlfriend Blues. Against a rollicking backbeat he half speaks, half sings, ”Girlfriend, girlfriend, it hardly starts before it ends” before concluding “the last three letters say how it’s been.”

If you’re looking for some musical sunshine to usher you into summer, Trapper Schoepp’s got you covered

There are some guitarists that, when you hear them, are immediately recognizable. In some cases it’s because they are exceptionally flashy or are eternally linked to certain riffs. And then there’s Eric “Roscoe” Ambel. In his case, it’s more about a distinctive feel – rough-hewn yet melodic; gregarious yet never overblown.

Not surprisingly, Ambel’s signature sound is all over his first solo release in about a dozen (!) years. The collection includes a handful of songs written or co-written by Ambel, from the rock steady “Have Mercy” to the soothingly retro instrumental ballad “Cryin’ in my Sleep.”

Alongside his originals is a diverse batch of covers that truly showcase the Ambel style. There’s “Massive Confusion,” a Jimbo Mathus song that comes across as a Ramones outtake, and a bruising barroom version of Barrett Strong’s “Money.”

The pick of the litter, so to speak, is Ambel’s take on Gillian Welch’s “Miss Ohio.” The song starts out innocently enough, retaining the gentle sway of the songwriter’s version. Things devolve by song’s end, however, as the subtle dobro on Welch’s original becomes a fiery wash of Ambel’s electric guitar. It’s one of those epic solos that rains down on you like a heavy storm. And I mean that in the best possible way.

The music industry is a tough business. Just ask Robbie Fulks, who has played the major label game, rode the Nashville songwriters carousel and undoubtedly survived countless other experiences that would terrify the timid. His latest release, however, finds him making music on his own terms. Damn if it doesn’t suit him well.

Fulks has long been a songwriter’s songwriter, spinning entertaining stories with language that veers from humorous to sincere. Upland Stories tends towards the latter, with Fulks chronicling tales of the South both autobiographical and not. It’s predominately a pickin’ affair, centered around Fulks and his guitar. Sure, there are other instruments that make an appearance but it is Fulks who stands the tallest.

The Next Storm (Original Demo), Frank Turner (from the Xtra Mile Recordings release Ten for Ten)

Ten for Ten is one of those casual retrospectives that is filled with demos, acoustic versions and the occasional live track. Frankly they often tend to be a mixed bag. In Turner’s case, however, it illustrates the strength of his songwriting.

Turner’s past few albums have been increasingly bombastic rock affairs. Don’t get me wrong, I love them and have been known to throw my fist in the air and sing along loudly at his live shows. The finer moments here, however, return the focus to Turner’s songs, his voice and his acoustic guitar. It also serves as a reminder that the best music starts with a great song and Frank Turner’s got a bushel of ‘em.

Few do rock anthems like Willie Nile. There are numerous reasons why this may be, starting with the memorable melodies and huge sing-along choruses that is a hallmark of his songwriting. The biggest factor, however, is his enthusiasm and passion for rock and roll. That quality is on fine display with his latest release.

Among the stand-outs on World War Willie are two songs that pay tribute to rock icons — an original song about Levon Helm and a Willie-fied version of Lou Reed’s “Sweet Jane.”

Then there’s this track that is classic Nile, an ode to the rock spirit that we discover in our youth and, certainly for Nile, carry throughout our lives. “Sixteen and crazy, we were ragged and free, we’d get loud we thought we’d always be forever wild.“

The Lights of Carencro, Rod Melancon (from the Blue Élan Records release LA 14)

The old adage says to write what you know. While Melancon lives in LA these days, his musical muse is his old stomping grounds in southern Louisiana.

If Parish Lines, Melancon’s last release, showcased a more optimistic side of the southern experience, things get significantly darker on em>LA 14. He sings “ain’t nobody mess with Perry and come out alive” on the opening track, continuing on to reflect on losing a cousin and childhood companion to war in the country-tinged “Duane and Me.”

The ep’s centerpiece is “The Lights of Carencro”, a downright sinister sounding tale of a father dealing with the death of a son. Melancon speaks rather than sings, his voice heavily distorted, while producer Brian Whelan accompanies him with a blistering guitar. Give a listen but fair warning: you might never hear Bad Company’s “Feel Like Makin’ Love “– a reference point in the song – the same way again.

Nothing to Lose, Ted Russell Kamp (from the PoMo Records release Flying Solo)

In between producing and playing bass for other artists (he plays on the Melancon track above), Kamp has been quietly putting out some fine releases of his own. They tend to be solo affairs, just Ted and an instrument or two.

His latest has a decidedly late night feel. It conjures up images of Kamp in his studio, perhaps with a bottle of wine, getting lost in the moment. While the results certainly wet my appetite for full band versions, these stripped down performances brilliantly showcase the rootsy soul in his voice and songs.