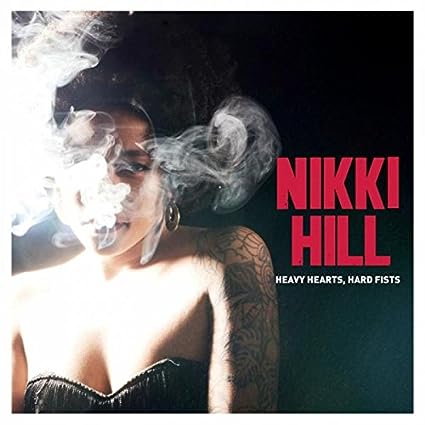 We’re gonna call this the best 2015 album that slipped by me last year. Better late than never, right? Hill’s sophomore release, the aptly titled Heavy Hearts, Hard Fists, hits like a punch in the gut.

While her sound is rooted in old-school R&B, it has a bravado and swagger that’s full on rock and roll. Bristling guitars, straight out of the Keith Richards canon, battle for attention with a pounding rhythm section and an occasional Johnnie Johnson-esque (Chuck Berry) piano flourish. Right in the middle of the fray sit Hill’s songs and voice. Gritty and explosive, she takes no prisoners.

Songs like “Oh My” and “(Let Me Tell You ‘Bout) LUV” conjure up images of Wilson Pickett and Otis Redding, respectively. Except, in this case, one needs to imagine those legendary singers fronting a rock band. “Hotshot” has, dare I say, a searing ZZ Top-esque guitar riff while “Scratch Back” rumbles with a Little Richard intensity.

The album closes with a version of Sam Cooke’s “Twistin’ the Night Away” that owes more more to Cooke’s incendiary live performances than it does to his comparatively more restrained studio version (see One Night Stand! Live at the Harlem Square Club, 1963).

Nikki Hill is the real deal – fierce and dripping with old school attitude.

There’s a certain irony to Buddy Miller’s latest release. For years he has been the go-to guy – both as a guitarist and producer — that everyone called (or wanted to call) when they were headed into the studio. On this release, however, Miller turns the tables and makes his own calls to invite an assemblage of talented friends to join him for an impressive collection of performances.

The setting is the annual Cayamo cruise, during which Miller set up a temporary studio. With his guests he recorded a collection of songs that lean heavily on country standards but also includes a pair of Rolling Stones and Gram Parsons classics. And who are the friends, you ask? They are an impressive crew that includes Lucinda Williams, Lee Ann Womack, Richard Thompson, Brandi Carlile and Kacey Musgraves to name just a few.

It’s difficult to pick a single favorite among these performances to include on the playlist. Then again, it’d be hard not to go with Kris Kristofferson joining Miller to perform his timeless “Sunday Morning Coming Down.”

It Ain’t Easy, Javier Escovedo (from the Saustex Media release Kicked Out of Eden)

Anyone who has talked to me about music over the last several has probably heard me bemoaning that 2015 was relatively light on straight-up rock and roll. Well, apparently artists were saving the rock for 2016 and Javier Escovedo is among those leading the charge.

It’d be easy to say that Escovedo lets his guitar do the talking on Kicked Out of Eden but that doesn’t do the music justice. Escovedo’s songwriting channels the best of the classic rock era, yet it does so without sounding dated. Songs like “It Ain’t Easy” and “Bad and Good” call to mind the more bombastic moments of bands like the Faces and the Rolling Stones. He even throws in a touch of the Byrds on the folk-tinged “Just Like All the Rest.”

If you’re looking to rock, give Javier Escovedo a listen. You won’t be disappointed.

Your Damn Vanity, Harvest Thieves (from the self-released Rival)

This Austin-based quintet demonstrate both maturity and a touch of musical diversity on their debut release. Things kick off with a rootsy tribute to Bob Dylan but throw in some jam band grooves and some good ol’ rock and roll as the record progresses. One will hear a strong dose of acoustic guitar and mandolin, but there’s also a healthy infusion of electric guitar.

The one constant in the music is a fun-loving spirit. It is on fine display with this track which would fit well into the Old 97’s catalog. All in all, the group makes a strong case for bringing the rock back to Americana. No complaints here.

Pinegrove songwriter Evan Stephens writes for his generation, capturing 20-something angst while somehow managing to walk the line between anxiety and composure. Some of this is attributable to the band’s ramshackle sound which at times rumbles with a happy-go-lucky attitude. The result is a sound that recall early Wilco or Whiskeytown, certainly two mighty fine touchstones to have.

The album is book-ended by a remarkable pair of songs – aptly titled “Old Friends” and “New Friends” – that chronicle the journey from lamenting friendships faded and lost to the yearning to finding those that are fresh and new. “I got too caught up in my own shit,” he sings on the opener, “that’s how every outcome’s such a comedown.” While still a bit dispirited in the album closer, he nonetheless tries to look forward, “so I resolve to make new friends, I liked my old ones but I fucked up so I’ll start again.”

Singer-songwriter McFeron leans heavily in a philosophical direction on his latest release. Yet, even as he explores topics considered and reflective, he still manages to maintain the uplifting quality of his music. The songs are brought to life with production that is pristine but not overbearing, anchored by McFeron’s soothing voice and Alisa Milner’s subdued but luscious harmonies.

This Budapest, Hungary-based quintet was a SXSW discovery from a few years back. They put on a performance filled the room with a rock and roll fervor. From Ivan’s impassioned vocals to the band’s blistering accompaniment, the group bridged a 1960’s garage rock sound with a 2000’s intensity.

This type of energy can often be difficult to capture on record but damn if they don’t get it right on their latest release. The songs crackle with a foot-stomping fervor, as searing as they are infectious. It’s the kind of music that is almost guaranteed to bring a smile to your face as you rock with abandon.

A word of caution, however. One listen and you’ll be craving the chance to see them live. So how about it fellas, perhaps it’s time for a US tour?