You’re Dreaming by The Cactus Blossoms 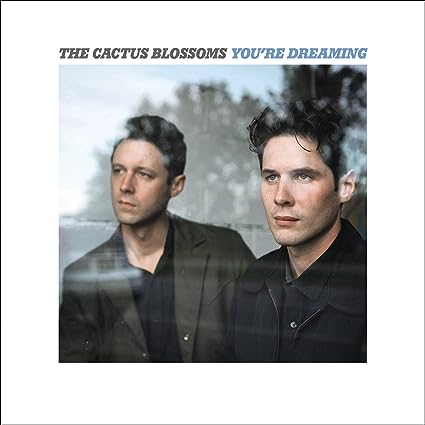 There was a time when brotherly harmonies dominated the musical airwaves. From the Everly Brothers in pop to the Louvin Brothers in country, it was a sound that was both soothing and satisfying. Despite the fact that this music was a touchstone for many artists that followed, however, the style ultimately faded from favor. Until now.

Meet the Cactus Blossoms, two Minneapolis brothers who revive the magic of that bygone era. From the chugging country beat of “Change Your Ways or Die” to the rumbling rockabilly guitar of “No More Crying the Blues” the duo take the listener on a musical tour through time and harmonic genre.

Their songwriting rings true to their predecessors as well, filled with lyrics that are straightforward yet have a subtle charm and sophistication. “When I pulled up to the crosswalk, ease up on the small talk, you know what’s on my mind,” they sing on “Stoplight Kisses.” “Stoplight kisses, you drive away my blues,” the song concludes.

Production duties were handled by JD McPherson, no stranger to retro music. Here’s hoping that this is only the beginning of a harmonized renaissance.

Deeper Water and Better Be Home Soon, Paul Kelly and Neil Finn (from the Omnivore Recordings release Goin’ Your Way)

Paul Kelly and Neil Finn are two masters of the songwriting craft, each boasting catalogs that are both broad and deep. A few years back the two artists teamed up for an Australian tour (where’s the US love, guys?!), sharing a band and one another’s songs.

Fortunately they captured one of the shows as a special double album, which was somewhat quietly released in the US at the end of last year. While it’d be hard for the prolific songwriters to fit all their greatest hits in a single show, they do cover a fair amount of ground in the two hour performance.

If you’re a fan of either artist, you’re sure to enjoy the live renditions of their classic songs. If you’re not a fan, you should listen as well as you’ll quickly be converted into one.

Dusty Roads, We/Or/Me (from the self-released Everything Behind Us is a Dream)

Chicago singer-songwriter Bahhaj Taherzadeh walks the fine line between vulnerability and confidence. His songwriting is intoxicating – soothing and with an air of sophistication. It makes for the perfect late night soundtrack, the kind of music that invites you to close your eyes and get lost in its beauty.

Songs like “Dusty Roads” compliment genteel musical arrangements with a lyrical wanderlust. It creates a sense of longing that also has a breath of optimism. “Between the visions of midnight and the hours of the sun,” he sings on the opening track from his latest release, “let me go, let me live out on the dusty road.”

Done, Hello Industry (from the self-released When I Was Young)

They say that great art is often born from anguish and suffering. Such is the case with the Chicago duo of Nathan and Heather Peterson, who perform as Hello Industry. While awaiting the arrival of their fourth child, they were given the heartbreaking news that she would be born with a fatal disease.

Like many an artist, the range of emotions that they felt became an integral part of their songwriting. The resulting album offers a poignant reflection on life, mortality and love. The glossy production does little to hide the personal nature and emotional gravity of the songs. It is a collection both moving and, in its own way, uplifting.

Perhaps the best part of the story: their daughter defied the odds and recently celebrated her first birthday.

For Cryin’ Out Loud, Western Star (from the Saustex Records release Fireball)

Baltimore’s Western Star don’t mess around on their latest release. With Old 97’s lead guitarist Ken Bethea in the producer’s chair, they deliver a fist-full of rock and roll. Dueling guitars wail while the band’s rhythm section bludgeon their instruments. Somehow, however, the songs maintain their melodic, fist-pumping glory. Crank it up.

I Can Swing a Hammer, The Wet Secrets (from the Six Shooter Records ep release I Can Live Forever)

This Edmonton, AB sextet was a totally random discovery at last year’s SXSW. I was waiting on some friends when I noticed a group standing nearby wearing high school band uniforms. My curiosity was piqued. Fortunately my friends were a few minutes late so I caught their first few songs and was immediately smitten.

The group traffics in high energy, intelligent and sometime quirky pop, a la the New Pornographers. Heck, you’ve got to have the musical chops to perform in flamboyant band uniforms, something the Wet Secrets do with flair. And what’s not to like about a band whose label describes them as “dress(ing) up their scrappy, scathing outlook in impeccably tailored pop attire.”

Daredevil Man, Redray Frazier (from the self-released Blood in the Water)

Portland-based Frazier has quite the musical pedigree. He has spent time singing gospel music in his father’s Baptist church, touring the country as front-man for a soulful rock band and performing as part of David Byrne’s band.

While the eclectic background informs the music of his solo career, it doesn’t define it. Blood in the Water is a rocking R&B record, pure and simple. Six tracks of taut soul that is rooted in the 1970’s funkified tradition yet has plenty of contemporary flourishes.

I’m not sure if Stevie Wonder has had the pleasure of listening to this release, but I expect he’d break out into a big ol’ grin if he did.

Pasadena ’68 and Dakota Shakedown give new definition to the phrase “two for the price of one.” The two groups are comprised of the same members, the difference being that Nick Leet and Mike Hjelden take the role of songwriter and front-man for Pasadena and Dakota, respectively. Not surprisingly the groups share a common bond – a fondness for straight-up rock-and-roll. Booming drums and roaring guitars drive towards fist-pumping choruses. The snow may be falling (at least ‘round these Northeast parts), but this dual ep will heat things up nicely.

Josh Berwanger and his band bring the best of 1980’s rock into the 21st century. In fact, in the case of this track from their latest release, they do it in a single song. The group lulls you in with acoustic guitars and sugared harmonies before unleashing some feedback-drenched electric guitars that somehow maintain a symphonic quality.

Elsewhere on the ep you’ll find roaring rockers (“Cherry”) and gentle acoustic ballads (“Lost and Founds”). Demonios makes for one fun listen from start to finish, filled with plenty of melodic harmonies and power pop goodness.