Guy Davis is among the vanguard of musicians, including Keb’ Mo’, Eric Bibb, Otis Taylor, Alvin Youngblood Hart and Corey Harris, who have carried the blues torch lit by the post-war greats like Howlin’ Wolf, Willie Dixon, Muddy Waters, John Lee Hooker and B.B. King.   His newest album, Kokomo Kidd, reminds us why Davis is a key voice in his generation. 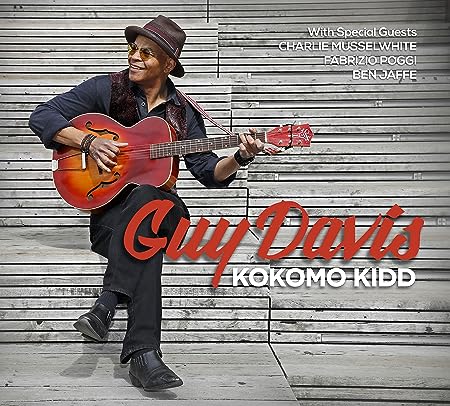 As the son of African-American entertainment royalty – actors Ossie Davis and Ruby Dee – Davis’ choice of blues as his primary form of artistic expression (he has also acted on and off Broadway) may have seemed surprising.  But, despite his upbringing in New York City, Davis has managed to capture his unique take on the world in a predominantly country-blues expression echoing Mississippi John Hurt and John Lee Hooker.  His buoyant personality and his talent on acoustic guitar, banjo and harmonica shine through on his recordings and in his performances.  An ambassador of music and goodwill, his tour over the next few months will have him playing in such venues as “Igloo Church,” Inuvik, Northwest Territories, as well as concert halls across Europe and the United States.

Davis’ clever song-writing and refreshing takes on others’ compositions can be heard on albums like Stomp Down the Rider (1995), Butt Naked Free (2000), Give in Kind (2002), Chocolate to the Bone (2003) and Skunkmello (2006).  In 2008, Davis joined Taylor and several of the other blues vanguard on Taylor’s project, Recapturing the Banjo, which provided a platform to feature the banjo – which originated in West Africa – in various African-American music forms from ragtime to rock.

But Kokomo Kidd, releasing Friday, provides a good look into the world of Guy Davis.  Davis tells some great stories with his songs.  The title song on “Kokomo Kidd” tells the amusing story of a bootlegger (who dispenses much more than just liquor) with some great finger-picking. “I Wish I Hadn’t Stayed Away So Long” is Davis’ homage to one of his role models – Pete Seeger.  “Taking Just a Little Bit of Time,” which you can check out below, lets the air in; “She Just Wants to be Loved,” with its surprisingly elaborate production, gives a glimpse of Davis’ capacity for expressing empathy; Davis channels Hurt on “Maybe I’ll Go,” and “Blackberry Kisses” has a playful vibe similar to one of Davis’ signature songs, “The Chocolate Man.”  Blues harp legend Charlie Musselwhite sat in on a cover of Willie Dixon’s “Little Red Rooster.”  If you’ve ever seen Davis in concert you probably know he admires Bob Dylan, son his inclusion of “Lay Lady Lay” isn’t much of a surprise, but his interesting take on Donovan’s “Wear Your Love Like Heaven” does provide a surprising conclusion to a diverse, entertaining album.