John Mayall is often called the “Godfather of British Blues,” but his legacy may include so much more than just pioneering the British blues.  By introducing a generation of rock fans to the blues, he arguably had a hand in saving blues as a viable music form at a time in the 1960s when elderly bluesmen were looked upon at folk festivals as charming examples of a bygone era.  More than 50 years after cutting his first single, Mayall continues to build on that legacy. 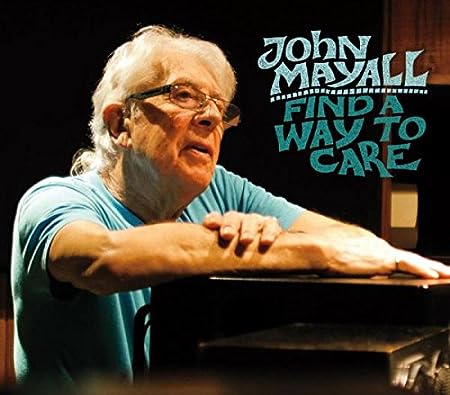 As I have explained on this blog before, one of the first albums I ever got a was Mayall’s Memories, a peculiar collection of autobiographical songs released in 1971 that is now out of print.  It was a gift.  It wasn’t Mayall’s most acclaimed work, but I liked it enough to start collecting other Mayall albums: The Turning Point,  Mayall’s magnificent mostly acoustic effort from 1969; and Jazz Blues Fusion, with its sleek horn arrangements.  Eventually, my collection would include the classic Blues Breakers with Eric Clapton, known as the “Beano album” because Clapton was reading the comic book in the cover photo; A Hard Road, which featured the guitar work of original Fleetwood Mac leader Peter Green; and Crusade and Blues From Laurel Canyon, which featured Mick Taylor who went on to join the Rolling Stones.  But more importantly, I liked the style of music, which led me to seek out original blues artists like B.B. King, Muddy Waters and Howlin’ Wolf; and then Lightnin’ Hopkins, Mississippi John Hurt, Sonny Boy Williamson II, Little Walter, John Lee Hooker and Willie Dixon; then the next generation of Buddy Guy, James Cotton and Taj Mahal.  Many other blues enthusiasts followed a similar path.

Almost every biography of Mayall includes the litany of rock stars who played with him, including Clapton, who left the successful Yardbirds to join Mayall’s Bluesbreakers before moving on to Cream, Derek and the Dominos, Blind Faith and a solo career; Green, John McVie and Mick Fleetwood, who formed Fleetwood Mac; and Taylor.  Mayall was so well regarded as a band leader that Harvey Mandel, Larry Taylor and Walter Trout all left a successful Canned Heat to join Mayall’s Bluesbreakers.  Later on, Coco Montoya played with the Bluesbreakers, and on 1990’s A Sense of Place, Sonny Landreth was virtually a member of the band though credited as a guest artist.  But Mayall’s reputation as a band leader and mentor ignores his own musical talents.  A multi-instrumentalist, Mayall played all the parts except drums on The Blues Alone in 1967.  And he is among the most exciting blues harp players in the world – one listen to “Room to Move” on Turning Point should convince any skeptics of that.

Hailing from Macclesfield, Cheshire, England, Mayall attended art college while living in a treehouse in Manchester after serving in Korea.  While working as an artist, Mayall continued to pursue his passion for the blues, eventually moving to London in 1963.  Mayall’s 1960s albums with Clapton, Green and Taylor are blues-rock classics, but over the years he has continued to produce high quality music, conquered an alcohol dependency, and matured as a showman (he’ll play “Room to Move” on request – unlike on Jazz Blues Fusion, where he can be heard refusing, saying “What, did you come here to hear an old record or something?”).  He has released several late-career gems, such as A Sense of Place in 1990, Stories in 2002, Tough in 2009 and A Special Life last year.  Earlier this year Forty Below Records released an archival recording, John Mayal’s Bluesbreakers – Live in 1967, which featured Mayall with Green, McVie and Fleetwood in concert performances in five London clubs.

Now in his 80s, Mayall continues to surround himself with fabulous musicians like guitarist Rocky Athas, bassist Greg Rzab and drummer Jay Davenport.  On Find a Way to Care, producer Eric Corne said he wanted to feature Mayall’s keyboard playing.  Mayall plays piano, Hammond organ, Wurlitzer, and clavinet as well as the customary guitar and harmonica so familiar to fans.  The album provides a menu of good, honest and earnest blues so typical of Mayall’s recent work.   The album also features a horn section on several numbers, including the lively Percy Mayfield cover “The River’s Invitation” and the throwback Lightnin’ Hopkins rocker “I Feel So Bad.”  The title track, among four Mayall compositions on the album, echoes Mayall’s heartfelt desire to see society through difficult times.  But the interplay between this cast of veteran players is stellar on all the selection, perhaps most notably on Mayall’s brooding take on Mudd Waters’ “Long Distance Call” on Mayall’s reminiscent “Long Summer Days.”  Mayall’s touch on the piano can be experienced at its most intimate on his quiet take on Charles Mose Brown’s “Drifting Blues.”