The Philadelphia Folk Festival, which has been around for 54 years, isn’t your grandfather’s folk festival. While there is still a smattering of venerable acoustic solo folksingers on its program like Arlo Guthrie, Bruce Cockburn and Tom Paxton, the festival has become a great platform for Americana artists of all flavors as well as for world music performers ready to inspire a new generation of music enthusiasts. 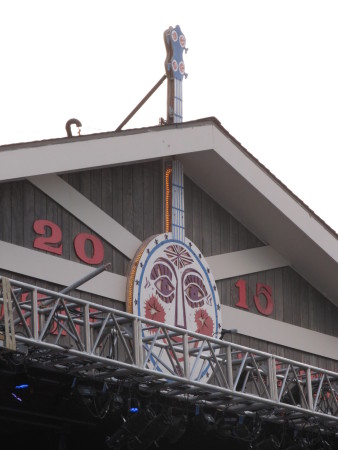 There are always a few discoveries for every music enthusiast at a festival of the magnitude of the Philly Folk Festival.  The first evening of the festival, after a hot afternoon of activities and shows, began with a barefooted young bluesman Selwyn Birchwood ripping explosive rifs with an energy reminiscent of the great Luther Allison in his prime and then slowing it down for some Piedmont blues style fingerpicking.  He was followed by three young sisters from Sweden – Baskery – who are quickly making a reputation in this country with their no-holds-barred approach to country music, including some tasty electric banjo slide solos.   Then it was time to be blown away by brilliant back-to-back performances by Twangville favorites Parker Millsap, whose intense lyrics and expertly crafted songs captured the audience’s heart, and Shakey Graves, whose astounding one-man band and power trio numbers blew the crowd away.  To top it off, Guthrie, a counter-culture national treasure regaled the crowd with his stories and music, including a slightly updated rendition of his classic “Alice’s Restaurant,” in honor of the incident that inspired the song, which happened 50 years ago over Thanksgiving.

The second day’s discoveries included the Hillbenders, from Springfield, MO, performing “Pinball Wizard” with a bluegrass (“Whograss”) makeover (they had already performed the entire rock opera “Tommy” in one of the side venues); soul-blues stalwarts The Lee Boys, who bring to mind the magnificent Holmes Brothers (one of whom – Wendell Holmes – just died in June following shortly after the death of bandmate Popsy Dixon in January); and Lyle Lovett, who brought a small orchestra along that surprisingly (to me) had as much of a gospel influence as the country music I had expected.

The final day included stellar performances by former Levon Helm sideman Larry Campbell and wife Teresa Williams; a rousing set by Colombian band El Caribefunk; and the final two acts drove straight down the Main Street of Twangville with an awesome performance by Philadelphia natives Hoots & Hellmouth and an extraordinary performance from North Mississippi Allstars featuring frequent collaborator Sharde Thomas – one of the few remaining fife players from the endangered fife-and-drum blues tradition – and, on one number, a co-lead guitar performance from drummer Cody Dickinson that left me scratching my head as to why brothers Luther and Cody don’t share guitar duties more often.

With daytime temperatures in the 90s, it was a challenging weekend for a music festival, but the Philly festival exceeded all expectations.  With a growing number of younger Americana artists participating, I would urge Twangvillians to keep an eye on the festival during the coming years.  But one suggestion – bring a flashlight to solve the logistics of life’s necessities after dark.