Victor Wainwright is relatively new on the national music scene, but his swampy honky tonk piano licks are having an impact in both his solo career and as a member of roots rock, blues and funk “supergroup” Southern Hospitality. 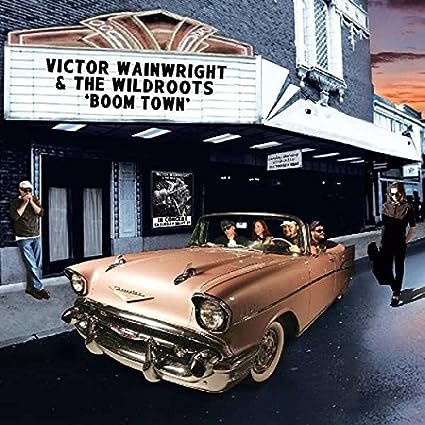 Wainwright, who grew up in a musical family in Savannah, Georgia, moved to Daytona Beach, Florida to attend college at Embry-Riddle Aeronautical University. He worked as an air-traffic controller for several years in Memphis, continued to play music, and returned to Florida, eventually o release three albums.  Wainwright and his band’s early self-released albums – 2005’s Piana from Savannah, 2009’s Beale Street to the Bayou, and 2011’s Lit Up! – garnered enough attention to score him the “Pinetop Perkins Piano Player of the Year” honor at the Blues Music Awards in 2013 and 2014.

In 2011, Wainwright got together with kindred spirits guitarists J.P. Soars and Damon Fowler to form Southern Hospitality, whose Easy Livin’ album in 2013 offered an eclectic mix of roots and soul music reminiscent of classic southern rockers Little Feat during the Lowell George years.  With a raucus, raunchy keyboards style and a crusty voice akin to Dr. John and – at times – Tom Waits, the 34-year-old Wainwright may be primed for a long ride in the spotlight.

Boom Town, Wainwright and the WildRoots first “solo” release on the Blind Pig label, offers a good look into the variety of musical styles the WildRoots feature.  Ironically, for a band that features its piano player, two of the most memorable songs on the album – the spiritual “When the Day is Done” and the Waits-like “The Devil’s Bite” – were written by collaborator Stephen Dees and don’t feature the piano.  However, on numbers like Dees’ title track and “Genuine Southern Hospitality” and Wainwright’s “Piana’s Savannah Boogie” there is plenty of opportunity to hear Wainwright’s piano skills.  Wainwright was joined on the album by WildRoots Nick Black on guitar and Billy Dean on drums, as well as Dees on bass and guitars, Patricia Ann Dees, Charlie DeChant and Ray Guiser on saxophones, and Stephen Kampa on harmonica, as well as several guest artists.

Audio Stream: Victor Wainwright & the WildRoots, “When the Day Is Done”