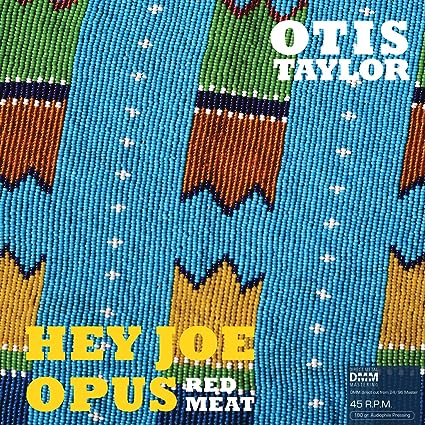 Taylor’s career, like his musical style, has been unconventional. He was active in the 1970s but gave up his career to become an antiques broker in Denver for many years until friends convinced him in 1995 to get back into music. Thus, Taylor is relatively new on the scene despite his years. After a couple of independently released albums, Blue Eyed Monster in 1997 and When Negroes Walked the Earth in 2000, Taylor produced his early masterpiece with White African in 2001. Each successive effort has moved a little further away from traditional blues influences. On 2007’s Definition of a Circle, the tune “Long Long Life” can best be described as a sort of free-form jazz. His music has often featured imaginative instrumentation, with unexpected contributions from violins, horns and even the cello (see a clip from a 2012 performance below).

In 2008, Taylor produced Recapturing the Banjo, which was a kind of concept album intended to feature the banjo in various African-American music forms from ragtime to rock, thus “recapturing” the instrument that originally came to America with the slave trade from West Africa. Recapturing the Banjo featured collaborations with several of the best of the next generation of African-American bluesmen, including Corey Harris, Alvin Youngblood Hart, Guy Davis, Don Vappie and Keb’ Mo’.  Taylor’s 2012 album, Contraband was stark yet beautiful similar to his 2010 release, Clovis People, Vol. 3.  In 2013 he collaborated with Indigenous front man Mato Nanji on the stellar My World is Gone.

Taylor’s Hey Joe Opus goes one step beyond any of his previous experimentation.  The album’s centerpiece, the Billy Roberts classic made famous by Jimi Hendrix – “Hey Joe” – appears twice on the album.  A Taylor concert staple he first recorded on Recapturing the Banjo, the song lends itself well to Taylor’s vocal style.  These versions also feature searing electric guitar crescendos from Gov’t Mule’s sensational Warren Haynes.  Along with “Hey Joe,” the album features no fewer than three renditions of Taylor’s own instrumental “Sunday Morning,” which serves as a companion piece for each “Hey Joe” and also closes out the album.  Taylor’s other haunting originals, “The Heart is a Muscle Used to Play the Blues,” “Red Meat,” “Peggy Lee,” the instrumental “They Wore Blue,” and “Cold at Midnight” work together with “Hey Joe” as one longer statement, rather than as a collection of songs, to create a stark, beautiful listening experience.