The Firewatcher’s Daughter, by Brandi Carlile 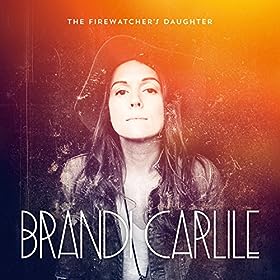 For some, the process of getting off the major label merry-go-round can be a traumatic experience that results in musical purgatory. Not for Carlile, who shifted to ATO Records and returns with another stand-out release. Her voice is as radiant as ever, beautifully complimented by the harmonies of bandmates Tim and Phil Hanseroth, and the songs are filled with her trademark soaring melodies and emotional depth.

The Firewatcher’s Daughter is in many ways her most diverse. Sure, it’s got plenty of the wonderful acoustic mid-tempo stompers and ballads that have long been her mainstay. Lest anyone think that she doesn’t know how to rock, though, she gets downright fierce on “Mainstream Kid.” The blaring guitars and pounding beat set the stage for Carlile to rail against social norms. “Individuality has never stood a chance against you,” she wails, “jump into the mainstream.”

The percussive onslaught continues on the gritty “Alibi” and the more uplifting “Blood Muscle Skin and Bone.” The two tracks form a kind of Dr. Jeckle and Mr. Hyde experience. The former finds Carlile confessing, “If you’re good at telling lies, you could be my alibi and I won’t have to atone for my sins” while the latter sees her crying out, “I need somebody strong, for when I’m feeling weak.”

Carlile excels when she explores human behavior and emotions. “When you’re wearing on your sleeve all the things you regret, you can only remember what you want to forget,” she counsels on “The Things I Regret.” She comforts a heartbroken friend on the delicate “The Eye.” Enchanting harmonies add extra depth to the song as Carlile sings, “You can dance in a hurricane but only if you’re standing in the eye.”

The Firewatcher’s Daughter is another beautiful album for the Carlile canon.

Rainy Day, Andrew Combs (from the Coin Records release All These Dreams)

Nashville-based Andrew Combs returns with another gem of an album, picking up right where he left off with 2012’s enjoyable Worried Man. His songs have a timeless feel, certainly reflective of the country roots of his Nashville base but also incorporating hints of Roy Orbison and other pop classicists of the early rock era.

The arrangements are robust across All These Dreams. Longtime compatriots Jeremy Fetzer and Spencer Cullum Jr. (of Steelism) are there, of course, and are complimented on many songs by dense strings, piano and even a castanet.

The focal point, however, is Combs voice. It is simultaneously soothing and mournful, especially when he contemplates longing and loss.

Number One, The Sideshow Tragedy (from the Old Soul Records release Capital)

“How long ‘til they make good on all those promises that they made?” Singer-songwriter Nathan Singleton brings a raw and often cynical world view to the bruising new release from this Austin, Texas-based duo. Singleton, along with drummer Jeremy Harrell, brought their raw and feisty sound to upstate New York to record Capital. The setting apparently suited them well – the album erupts with a gritty guitar and ferocious percussion. I guess the Texas blues fits well in the Northeastern mountains.

Pedestrian At Best, Courtney Barnett (from the Mom & Pop Music release Sometimes I Sit And Think, And Sometimes I Just Sit)

The Australian songstress makes a statement with her debut. Sometimes I Sit And Think, And Sometimes I Just Sit is ripe with attitude as Barnett spits out lyrics that seem stream-of-conscious but are actually taut character studies. The songs are propelled by scrappy guitars and rugged rhythms, infused with an indie rock ethic but packing a power pop punch. It has all the makings for a fun summer soundtrack.

Here’s one for the better discovered late than never category. Rockford, IL’s Miles Nielsen writes catchy pop songs that flow with an air of sophistication. This track from his 2011 release (with his band the Rusted Hearts, duh) is a great example. The song bounces with an infectious, happy-go-lucky attitude even as Nielsen sings about a relationship on the rocks, “My heart is a field that sows the seeds that go against the grain.”

The band is headed to the studio to finish up a new album. I, for one, am eager to hear it.

One Match Fire, Miss Tess and the Talkbacks

Miss Tess and the Talkbacks haven’t released an album of new music since 2012 but we’re not complaining. How could we when they’ve been keeping us sated with late 2013’s excellent covers ep The Love I Have For You (check out their killer cover of Ted Hawkin’s “Sorry You’re Sick”) and now this immensely infectious track that was just released as a Record Day single. It’s a little bit of rock, a little bit of twang and a whole lotta fun. If this is a taste of what’s to come with the band’s next album, we’re pretty darn eager for its arrival.

I expect many would agree that if you’ve been to New Orleans and haven’t seen Ruffins, then you haven’t fully experienced New Orleans. Fortunate for those who can’t make the trip, you can get a taste of the Ruffins magic on #imsoneworleans. The singer-trumpeter mixes classics like the Professor Longhair standard “Tipitina” and the legendary “Jock-A-Mo/Iko-Iko” to originals like the title track. Let Ruffins and his crack band bring the party to you.