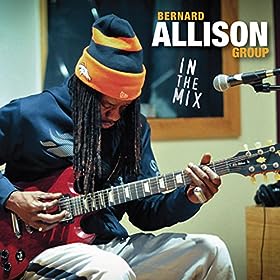 When I saw the elder Allison perform live in the early 80s, it was like watching pure energy.  Luther Allison’s guitar work was truly inspired, and his sweaty, frenetic stage presence was something like witnessing Hendrix at the apex of his short career.  Luther Allison’s music, however, was more readily embraced in Europe, so he moved there and homesteaded in Paris throughout most of his career, largely invisible to American music enthusiasts.  In the mid-90s, however, he signed with Chicago-based Alligator Records and was rediscovered in his home country and, for the first time, appreciated for the great musician that he was.  His 1994-97 albums Soul Fixin’ Man, Blue Streak and Reckless were utterly captivating, with gems like “Put Your Money Where Your Mouth Is,” “Freedom,” “Cherry Red Wine” and “Cancel My Check.”  Unfortunately, just as his own nation started to embrace him and recognize him with multiple W.C. Handy Awards (predecessors to the Blues Music Awards), Luther was taken down by inoperable lung cancer shortly before his 58th birthday in August 1997.

Bernard Allison is very much a chip off the old block.  Bernard was a guitar prodigy in his own right, and joined Koko Taylor’s band shortly after graduating from high school.  In the late 80s, Luther invited Bernard to tour with him in Europe, and provided studio time in 1989 for Bernard to record his first solo album, Next Generation, in Paris.  Like his legendary father, he spends much of his time in Europe.  He has much of his father’s genius on the guitar, and his soulful vocals are first rate.

In the Mix is appropriately titled, because it includes a mixture of styles that differs from some of his Chicago-blues dominated early releases, such as 1994’s Keepin’ the Blues Alive.  As his career progressed, his albums have included a mixture of funk, rock and good-old Chicago blues, including 1998’s Times Are Changing and his rocking 2005 release, Higher Power.   In the Mix, however, is perhaps Bernard’s most soulful offering to date, and it is also the least like his guitar-slinger father’s style.  It might also be the most accessible to non-blues enthusiasts.  The album includes five originals and five covers, including two (“Move From the Hood” and “Moving On Up”) from his father.  But even on his covers of his father, Bernard provides his own distinct touch.  The opener, a cover of Colin James’ “Five Long Years,” is tight, upbeat and catchy.  The first of Bernard’s originals, “Call Me Momma,” shows he has some serious songwriting chops, as does the very unbluesy soul ballad “Tell Me Who.”  Allison’s “Set Me Free” provides some nasty guitar work and provides a taste of straight-ahead blues.  Another highlight is the cover of Freddie King’s “I’d Rather Be Blind.”

The album was recorded at Winterland Studios in Minneapolis but, keeping up the European connection, was released on Germany’s Jazzhaus Records.  Allison’s band includes George Moye on bass, Mario Dawson on drums and Mark “Muggie” Leach on keyboards, and the album includes contributions from pianist Bruce B. McCabe and sax player Jose Ned James.