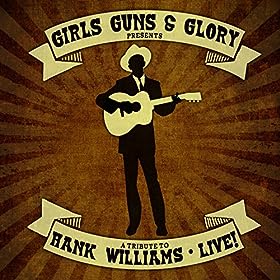 To say that the guys in Girls Guns and Glory are fans of Hank Williams would be an understatement. For the past five years they’ve celebrated the legendary songwriter with a series of annual tribute shows. They intentionally schedule these tributes for New Year’s Eve and Day, paying homage to the show that Williams was unable to perform due to weather and his untimely death, respectively.

Now those who aren’t able to attend the shows can join in the celebration. Next week the band is releasing A Tribute To Hank Williams Live!, a collection of eleven songs captured at last year’s event. From “Jambalaya” to “I’m So Lonesome I Could Cry” to “Your Cheatin’ Heart,” the boys breath new life into these classic songs. They even throw in a twelfth song, a studio recording of a lesser known (but no less impressive) Williams composition.

To celebrate the release, we are giving away a copy of A Tribute To Hank Williams Live!, signed by the band. To be eligible to win, post a comment with your favorite Hank Williams song. A winner will be selected at random when the contest ends on Friday, 27 February 2015 at midnight ET.*

While you consider your choice, check out Girls Guns and Glory singer-songwriter Ward Hayden’s thoughtful reflection on The Garden Spot Programs, 1950 a long lost and Grammy-winning collection of Williams radio recordings from 1950 that was released last year. You can read it here.