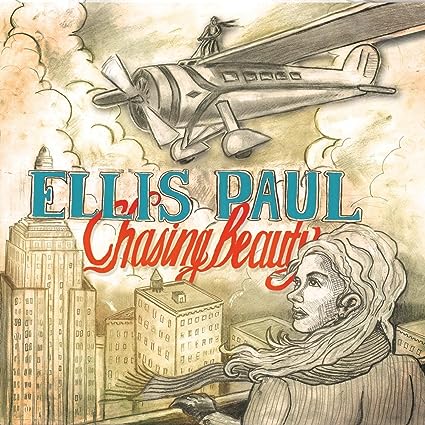 Ellis Paul long ago established his credentials as a folk musician. He is an astute observer of the world around him who excels at transforming stories into song. In recent years he has shifted a bit from his folk roots, flexing more of his acoustic pop muscles. The results, as Chasing Beauty demonstrates, continue to impress.

Album opener “Never Want to Lose You” is ushered along by an insistent beat as producer Kristian Bush’s mandolin and Red Molly’s harmonies give it an acoustic pop sheen. A chugging electric guitar powers the sugared melody of the infectious “Rose In a Cage.”

“Wasted” contrasts dark verses with a sweetened chorus as Paul describes drowning romantic sorrows in a bottle (or two) of whiskey.

The first drink makes you
The second drink fakes you
Three drinks you break down
The fourth drink wrecks you
Five, someone decks you
Six drinks wakes the town

Paul, who got his start playing in Boston, pays tribute to long-time Boston musician Dennis Brennan on the moving “Waiting On a Break.” The song captures the bleakness and the rapture of being a musician. Paul poignantly describes working a blue collar day job while dreaming of evenings spent performing music. A gentle piano leads towards a soaring string-laden conclusion as Paul sings:

Amidst all the pop, Paul reminds of his folk storyteller roots on the feisty “Kick Out the Lights,” which pays tribute to a legendary Johnny Cash performance and the partially spoken love song “One Kiss Could Do Me In.”

The Kill, Reed Foehl (from the Neverfoehl Records release Lost in the West)

The former Acoustic Junction leader spreads out his musical sound on his latest solo release. He shines brightest on the stark ballads that showcase the cinematic beauty of his writing and the fragile tone of his voice.

Blue Yodel No. 12 & 35, Sid Griffin (from the Prima Records The Trick Is To Breathe)

Griffin’s musical knowledge is as rich as his creative output. Over the course of a more than 30 year career, the founding member of both the Long Ryders and the Coal Porters has churned out a healthy catalog that stretches from garage rock to roots-influenced punk to Southern California country-rock. His recent work, both with the Coal Porters and as a solo artist, has a more acoustic flavor.

Here’s what Griffin has to say about this particular song:

Jimmie Rodgers, the Singing Brakeman, was a star shining brightly in the late 1920s till the Great Depression drove his sales down and TB drove him down. Bob Dylan was a sizeable Jimmie Rodgers fan and so am I. This led me to wonder what would happen if you crossed their two musical styles. And the answer is in this song … you get a tune which sounds like Willie Nelson!

Few do bittersweet quite like Cole. He takes marvelously crafted melodies and adds lyrics that smolder with drama and intelligence.

Here’s a prime example, a song that undoubtedly takes some inspiration from the academic surroundings near his home in Western Massachusetts.

Are these riches here the spoils of my retreat?
These rented rooms and bachelor’s degree
It’s a Penguin Classic scene
Broken spine and faded green
Trying to relocate my arms
Around a memory

The duo of guitarist Jeremy Fetzer and pedal steel player Spencer Cullum shine on their latest album of instrumentals. Having earned their stripes touring with artists ranging from Caitlin Rose to Wanda Jackson, they arrive with a sound that is spirited and fully formed. The combination of their respective guitar sounds rumbles across every track.

There are lots of artists who claim to be outlaw country, but Morgan and the 78’s are among the few who truly are. Their first live release was recorded in their hometown of Flint Michigan, a town apparently more country than many knew. They fire up the crowd with a full set of road-tested honky-tonk. This is whiskey-drinkin’ music at its finest.

Let the Day Begin, The Call featuring Robert Levon Been (from the Label Records/Lightyear/Caroline Records release A Tribute to Michael Been)

Tragedy struck when Michael Been, singer-guitarist for the Call, died in 2010 while on tour with his son Robert Levon Been and Black Rebel Motorcycle Club. His former band mates reunited in 2013 to pay tribute to Been, inviting his son to take on lead vocals. The shows, captured for this live release, showcase the band’s powerful songwriting. They found a way to set social and political commentary against brawny anthems.