Markus James has travelled to Timbuktu to unlock the secrets of the blues and found a connection between what he heard in the deserts of Mali to the fife and drum music of northern Mississippi. Like Corey Harris and the Dickinson brothers, James” preoccupation with exploring the drum-based blues of North Mississippi has led to an album that is interesting, compelling and entertaining. 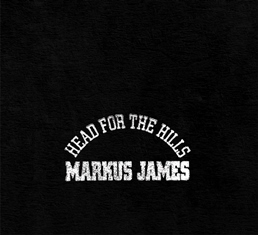 The California-based James has worked for years with Africans, particularly from the Wassoulou and Songhai regions of Mali, to produce his fascinating musical projects.  James” passion for West African music began with his first trip to Niafunke, Mali in 1994.  Initially following in the footsteps of Ry Cooder and Taj Mahal, James has continued to incorporate African rhythms and sounds into his music.  Some outstanding of his work include Nightbird in 2003 and Snakeskin Violin in 2008.

With Head For The Hills, because of James” adoption of the drum-based, gritty,  low-fi blues of North Mississippi, several of the pieces are reminiscent of North Mississippi Allstars – a raw and visceral sound that seems almost subversive in its lack of polish.  But James makes the project work with tremendous guitar skills, occasional harp playing and vocal prowess.  Each of the tracks features James and a drummer (or hambone or bucket percussionist) – and that”s it.  There are some excellent tracks on the album, including both an acoustic and an electric version of the title tune (the acoustic version is included in this post), an outstanding instrumental “Speepyhead,” and “Candyland Refugee.”  But every track on the album is solid, and James” guitar work and that of the accompanying drummers is superb.  James” guest drummers include Kinney Kimbrough (son of Junior Kimbrough), Calvin Jackson (who played with R.L. Burnside among others), Aubrey “Bll” Turner, R.L. Boyce and Marlon Green.