E.G. Kight’s is a unique voice in contemporary music.  Her heartfelt, gospel and country-tinged blues blend American traditions into a toe-tapping good time.  Her latest album, A New Day, demonstrates what her dedicated following has known since the late 90s – that she is a special talent. 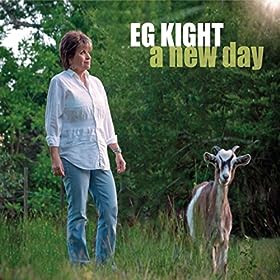 Though Georgia native Kight grew up listening to old time country music like Hank Williams and Patsy Cline and singing gospel in church, it is said she discovered her true calling upon listening to “queen of the blues” Koko Taylor as a teen.  Since the 1990s, the guitarist and vocalist has been writing and playing the blues, and she survived a serious illness to continue on making music.

A New Day is the eighth album to be released by Kight.  Kight wrote or co-wrote all the songs, with co-writing credits for five tunes going to Tom Horner and one each to the late Ann Rabson (Uppity Blues Women) and Lisa Biales.  Album highlights include “Holdin’ On,” “Graveyard Dead Blues,” “Don’t Give Up,” “Bad Times” (a duet with Greg Nagy), and “Low Mileage Woman.”  For the album Kight was joined by Gary Porter on drums, Johnny Fountain on bass, Ken Wynn on guitar and Mike Harrell on keyboards along with guest appearances by album producer Paul Hornsby on keyboards, Tommy Talton on guitar and Nagy.