Swimmin’ Time, by Shovels and Rope 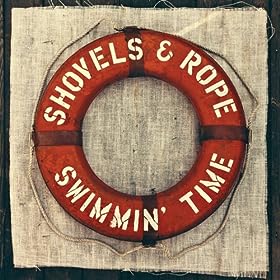 Cary Ann Hearst and Michael Trent — aka Shovels and Rope — just keep getting better and better. Swimmin’ Time takes their customary percussive guitar and drums and expands their musical palette with piano, horns and a host of other instruments. The result is something special.

The duo push at genre classifications across this thirteen-song collection. “Bridge on Fire,” while still grounded in Americana, is a perfect pop confection. A prominent piano joins their brilliant harmonies to give the song an extra sugary crunch. That combination continues on “Coping Mechanism,” which has a fun 1950’s feel.

“After the Storm” has an epic quality to it. The song opens gently but soon explodes with Hearst and Trent’s emotionally charged vocals. The lyrics describe a quest for redemption from past wrongs despite the recognition that these same failures still stand in the way.

The duo round out the album with “Mary Ann and One-Eyed Dan” and “Save the World,” a pair of stripped-down songs that hearken back to the group’s rootsy early days. All the better to enjoy the charm of their singing and songwriting.

I’m In Love with Everything, The Fauntleroys (from the Plowboy Records release Below the Pink Pony)

In this case, the album title is as real as it is descriptive. Four musicians – friends and admirers of one another’s work – gathered in a room below a former NYC restaurant called the Pink Pony to bash out their debut release. The results are at once cohesive yet reflective of each artist’s individual personality. Alejandro Escovedo brings an appreciation for 1970’s British blues-based rock, Ivan Julian lends his punk pedigree, Nicholas Tremulis contributes his eccentric pop-rock feel (“Suck My Heart Out with a Straw” is one of his contributions) and Linda Pitmon adds her powerhouse drumming.

Audio Download: The Fauntleroys, “I’m In Love with Everything”

All That We Have Is Now, Jesse Winchester (from the Appleseed Recordings release A Reasonable Amount of Trouble)

Although we lost Jesse Winchester earlier this year, he left us with a new album that was completed just prior to his passing. Winchester possessed a genuine and gentle spirit as well as an insightful lyrical eye, both of which are sharply evident here. The twelve tracks on A Reasonable Amount of Trouble, nine originals and three covers, are a reminder of his musical allure.

In the interest of full disclosure, American Gun’s Todd Mathis is a long-time contributor to Twangville. Don’t hold that against him, though. Mathis also happens to be a talented songwriter. After releasing the rootsy Please… Don’t Tread On Me (recorded with Whiskey Tango Revue) last year, Mathis rejoins his American Gun compatriots for the bruising Promised Youth.

As is the group’s style, they let their electric guitars lead the charge. This go-around, however, finds them adding some synthesizers and strings to give the music added density. The result is a rock record with a dark and brooding vibe. Here, for your listening enjoyment, is the tale of a woman who has given up on love.

I shared a vintage video of the late, great Scruffy the Cat a few weeks ago (here). It was either a great introduction or a welcome reminder of the band’s infectious energy.

This new collection of previously unreleased tracks offers a fun glimpse into the band’s creative arc. Starting with their rough early recordings through to their late era sessions at legendary Ardent Studios in Memphis, it showcases the charm in their songwriting and the unbridled enthusiasm in their performances. Give a listen to early tracks like the boisterous “Big Fat Monkey’s Hat” and the more slickly produced but no less spirited later output like “Love Song #9” and you’ll hear what I mean.

Sure Thing, Sam Morrow (from the Forty Below Records release Ephemeral)
My introduction to this LA by way of Texas singer was his somber cover of Bruce Springsteen’s “Dancing in the Dark” that was released earlier this year. His debut album proves that Morrow stands tall in his own rite, thank you. There is both warmth and world-weariness in his music, all the more impressive given that Morrow is still in his early 20s. Restrained arrangements, often infused with subtle strings, give the songs additional depth.

Got Caught Up, Pete Donnelly (from the self-released Face the Bird)

I’m a sucker for a good pop song. Fortunately for me (and maybe you, too), Pete Donnelly’s got a catalog that is filled with ‘em. Donnelly has an impressive resume — he is founding member of the Figgs and has also logged more than a few miles with the Candy Butchers and NRBQ. As if that weren’t enough, he has also released a couple of mighty fine solo albums. Check out this gem, co-written with Shelby Lynne, from his most recent release. Man, those horns!