Ryan Adams really summed up the 2014 Newport Folk Fest experience well when he said, “”Like ten years ago I was depressed and now I’m playing music with *&$%ing sailboats in the background.” The setting at the legendary festival is literally one of the most beautiful spots as it juts far out into Narragansett Bay. The boats were beautiful, if you happened to look at them for more than a passing glance. I noticed the setting briefly but was totally captivated by the music. The festival has certainly become the must-see spot for summer Americana fans. As other festivals have vastly changed direction, Newport has remained a consistent venue for some of the best folk/rock/americana/blues/R&B music. 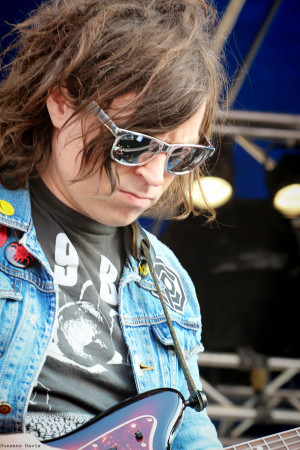 Starting with Friday’s headliner, everything really did seem to be looking up. After seeing him many times through the years, this show had him as upbeat as I’ve ever seen the erratic performer. He certainly acknowledged it as well. He couldn’t get enough of picking fun at bassist Charlie Savage and the crowd was eating it up. While there certainly was much of Ryan’s offbeat and rather eccentric commentary, it was so positive that it seemed like Ryan is a new man.

Now for the music. Ryan played some old favorites which included humorous commentary such as “Oh My Sweet Carolina” (which he called “bold-faced lies”), “Come Pick Me Up” (“a moment of stupidity”) and “Let It Ride.” He also played his new single “Gimme Something Good” and a variety of tunes from in between. Ryan walked on to stage looking like 10 years ago with his disheveled hair and denim jacket. But honestly, Ryan’s fun persona was the story.

I’ll be honest and say that I had lost track of fine songwriter of Rilo Kiley fame, Jenny Lewis. But a few minutes into her set at Newport and I knew I’d have to have a second look at her solo career. Lewis reminded me of a more Americana and more varied version of She & Him. She came out dressed like it was the summer of love with a painted Martin Acoustic Guitar to match. She went back and forth between the poppy, acoustic singer/songwriter, and the piano ballads. Her set was hard to walk away from. 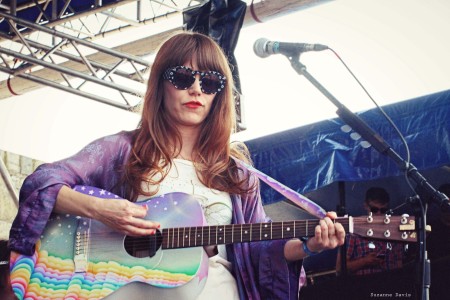 I did have to check out Sun Kil Moon (Mark Kozelek). His gentle nylon stringed guitar picking and focus on untraditional songs certainly is a bit of an aquired taste. The songs often seem to meander along without a clear destination. In a live setting, seeing Mark play the tunes certainly helped him to connect a bit more with the audience. But Mark was the opposite of Ryan. He just seemed a bit down and didn’t seem to enjoy the show too much. Unfortunately, I didn’t catch my favorites from Sun Kil Moon’s – Ghost of the Great Highway.

I did catch a few of Robert Hunter’s songs. While he’s certainly no Jerry Garcia, Hunter’s connection with American Beauty classics “Friend of the Devil” and “Ripple” were great fun to watch. They fit so well with the festival atmosphere and Hunter did not hesitate to regale the crowd with anecdotes from way back when. 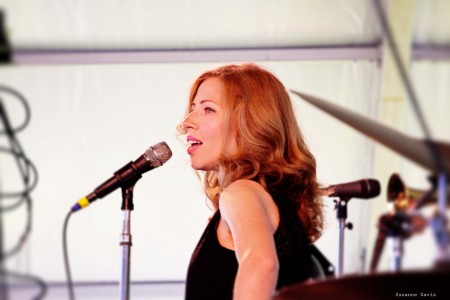 In addition to the music, the setting could not have been better. While they were crowded, the space worked well for the different personalities within the crowd. Families had room to spread out on the lawn, those who wanted to drink could easily find their spot in the beer garden, and smaller groups could move between the four stages easily. The food had a variety of options including super fresh seafood (I enjoyed fantastic oysters and a lobster roll), grassfed beef burgers, and a variety of other options. As a quick break from the sun, I tried my hand at the rather small Deering Banjo tent.

Two minor complaints, the heat and the parking. Water was available everywhere and it is the middle of teh summer. Fort Adams State Park juts out into the bay  and that means there is one way out of the park. Lots of parking, one way out. So it took a while staying until the end and then trekking out to the car.

The quality of the music and the overall experience certainly made up for any minor complaints. The Newport Folk Fest has been able to iron out any kinks after over 50 years and it showed.