Too Blessed to be Stressed, by Paul Thorn 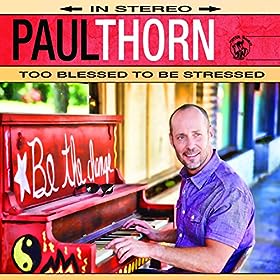 It has been a bit of a wait for some new music from Tupelo Mississippi’s second favorite musical son. Thorn bridged the gap between 2010’s Pimps and Preachers and now with What the Hell Is Goin On, a fun covers album. While I certainly enjoyed his re-working of lesser-known songs by Allen Toussaint and Lindsay Buckingham, it made me that much more eager for a collection of Thorn originals. Thankfully, the wait is over.

There has always been an endearing quality to Thorn’s songwriting and it is in fine form on Too Blessed to be Stressed. Mix one part optimism with one part humor, peppered with a dash of realism, and this is the sound that emerges.

“Mediocrity’s King” is a great example. The song finds Thorn lamenting the state of everything from culture to government. “They manufacture stars on a tv stage, Johnny Cash couldn’t get arrested today,” he declares before really letting loose:

Thorn rachets up the humor on “Backslide on Friday.” An ambling beat shuffles him through the days of the week. I sin on Saturday, I repent on Sunday” he sings, “then I tell myself I won’t procrastinate on Monday, Tuesday I do like I should.” It leads to the inevitable conclusion captured in the song’s title.

The fun continues with the Mississippi boogie of “Real Goodbye,” a stout kiss-off to a new ex. “My future’s bright now that I’ve put you in the past,” he proclaims, “hasta la vista, syonara, kiss my ass.”

Thorn’s infectious optimism shines brightest on “Don’t Let Nobody Rob You of Your Joy.” The song slowly builds from a subdued opening to a soaring finale as Thorn shares “the words that my Grandpa always said.” Words to live by, indeed.

Tears Don’t Matter Much, Lucero (from the INgrooves release Live in Atlanta)

I expect that I’m not alone when I saw that Lucero are one of those bands from whom I’ve long awaited a live release (I’m looking at you, too, Patrick Sweany). Well, the boys from Memphis have finally delivered. Recorded over three nights in Atlanta late last year, the band culled thirty-two tracks spanning the band’s nearly fifteen year career. Some fans may quibble a bit but it plays like a greatest hits album. From the horns on “That Much Further West” to the roar of the crowd on “Tears Don’t Matter Much,” Live in Atlanta finds the band is exceptional form.

Neon Hearts, Jim Lauderdale (from the release I’m a Song)

I suppose that we shouldn’t be surprised that Jim Lauderdale has amassed an impressive array of friends over his more than thirty year career in the music business. He has worked with artists ranging from Elvis Costello to Robert Hunter and Patty Loveless to, of course, frequent collaborator Buddy Miller. Many of these friends appear, both as co-songwriters and performers, on his tuneful new twenty-song collection.

With one foot firmly grounded in classic country era, Lauderdale still manages to have a satisfying freshness. Let’s call it vintage without feeling dated. We can also call it damn good.

This Missouri-based three-piece makes a mighty fine racket. Singer-songwriter Miller and his cronies — Scott Leeper on the washtub bass and Doug Dicharry on percussion, trombone and various other instruments — play country and bluegrass with a healthy dose of attitude. The group often infuses its songs with Miller’s slide guitar to give them extra edge. Here’s one of the more traditional numbers from their fine new record.

This quartet from Australia seem determined to crack the US bluegrass scene. If their US debut is any indication, they’ve clearly got the chops to do it. There’s both energy and buoyancy to their music, with songs chock full of catchy pop melodies.

Feet Back on the Ground, Dead Fingers (from the Pipe & Gun/Communicating Vessels release Big Black Dog)

Alabama husband and wife duo Kate and Taylor Hollingsworth have a great ramshackle sound. They start with enticing pop melodies and build raw yet immaculately crafted arrangements around them. From the haunting “Pomp & Circumstance” to the scampering “Feet Back on the Ground,” they deliver the goods.

Audio Stream: Dead Fingers, “Feet Back on the Ground”

Although the quartet call Portland, Oregon home, their more likely to be found somewhere on the road. Their forthcoming ep reflects their wanderlust ways with an eclectic sound that runs from the honky-tonk of “Messin’ Around” to their intensely dark rock and roll cover of Townes Van Zandt’s “Waiting Around to Die.”