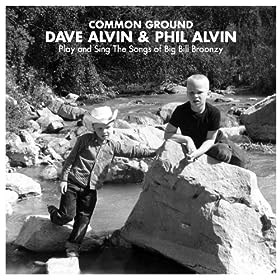 This album is no doubt a labor of love. Sure, the Alvin brothers have a reputation for family squabbles. They are still brothers, however, who share a passion for music. So I suppose that we shouldn’t be surprised that they’ve reunited – for the first time in almost 30 years – to pay tribute to a songwriter who inspired their careers in music.

The man in question? Big Bill Broonzy, a guitarist and songwriter who emerged in the 1920’s and 1930’s. Broonzy was a pioneer of acoustic country blues and is considered by many as one of the forefathers of rock and roll.

The brothers Alvin tackle twelve songs from the Broonzy catalog, ranging from early gems like “Big Bill’s Blues” to later classics like “Key to the Highway.” Not surprisingly for those familiar with the brothers earlier work in the Blasters, they bring these songs to life like few others can. Brother Phil is in fine voice while brother Dave lets loose on both electric and acoustic guitar.

Tracks like the acoustic opener “All By Myself” and “How You Want It Done?” have a healthy swing; others, like “I Feel So Good” and “Truckin’ Little Woman,” have a great juke-joint swagger.

Two masters paying tribute to a legend – what’s not to like?

Audio Download: Dave and Phil Alvin, “Key to the Highway”

Sarah Borges and Girls Guns and Glory have already independently released two of my favorite albums so far this year. I didn’t think that they’d be able to top that. Man, was I wrong. The two have collaborated on a killer new vinyl/digital single.

One side is their take on the Sonny & Cher classic “Baby Don’t Go.” It’s the flip side, however, that really rocks. The Borges-penned track may clock in at just under two and a half minutes, but it packs one hell of a punch.

Well, I was drinking whiskey and he was drinking wine
I had a bottle in my pocket, it tasted like turpentine
We was gettin’ loose to the hillbilly sway,
I knew I should have turned around and run the other way.

Audio Stream: Sarah Borges and Girls Guns and Glory, “Get as Gone Can Get”

Our Kind of Love, Christopher Denny (from the Partisan Records release If the Roses Don’t Kill Us)

Denny has a voice the likes of which you’ve likely never heard before. It’s beyond retro, it’s vintage. Think Al Jolson crooning back in the early 20th century. There’s a bit of drawl and plenty of character in his singing as well.

While that alone would make Denny unique, his songwriting voice is equally distinctive. He brings to life the hardships that he has encountered, more often than not with a positive attitude and outlook, and reveals a tender romantic side as well. The results are magical.

Shock to the System, Eli “Paperboy” Reed (from the Warner Brothers Records release Nights Like This

Back in the 1960s there was an dazzling type of R&B-flavored pop song, soulful and made for dancing. The lyrics used simple language without being simplistic. The results were infectious.

Reed has spent years studying the forebearers while honing his own musical style. Whereas his earlier releases had a strong retro feel, his latest crackles with a contemporary vibe. The blend of old and new is potent and makes for the perfect soundtrack to your summer.

Reed traveled to FAME Studios in Muscle Shoals, Alabama to record this alternate version of a fave track from Nights Like This. The backing band includes legendary Swampers David Hood, Jimmy Johnson and Spooner Oldham.

How Would You Feel, Cowboy Mouth (from the Elm City Records release Go)

It’s great to see that, as Cowboy Mouth celebrate their 25th anniversary, the New Orleans-based quartet haven’t lost their step. Fred LeBlanc still bristles with a manic energy while band co-founder John Thomas Griffith still has a knack for writing catchy pop anthems. As this track clearly illustrates, they have no intention of slowing down. Here’s to another 25 years.

Oakland by way of Mississippi songwriter Murry follows up his excellent 2012 release The Graceless Age with another gem, this time an ep. His songs can be jarring but that’s part of their charm. Whether telling stories (“The Murder of Dylan Hartsfield”) or capturing moments or emotions (“The Glass Slipper”), he applies a vivid and darkly realistic eye.

This song pays a moving tribute to his late friend and producer Tim Mooney, known to many for his work with American Music Club and Sun Kil Moon.