ALBUM OF THE MONTHS

All Or Nothin’, by Nikki Lane 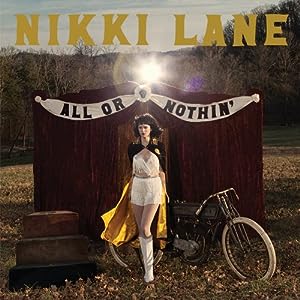 Nikki Lane’s sophomore effort caught me by surprise. I’d be lying if I said that I had more than a cursory exposure to her 2011 debut, but the just released All Or Nothin’ has grabbed my attention.

Lane’s songs are rooted in country, albeit with a healthy nod towards the pop end of the spectrum. “You Can’t Talk to Me Like That” is a soothing retro ballad with a chorus of harmonies setting the stage for Lane’s entrancing vocals. “Seeing Double” moves along with a rumbling rockabilly beat while a lap steel guitar propels the gentle “Good Man.”

Lane doesn’t pull any punches lyrically. All the better I say. She takes a defiant tone on “Man Up,” demanding “you better get off your ass, you better man up or I’m gonna have to be the one who gets tough.” She steps out on the brash and boozy “Sleep with a Stranger,” proclaiming “I ain’t looking for love, just a little danger.”

As if to drive the point home, the title track finds her declaring “It’s always the right time to do the wrong thing.” Words to live by, right?

Beauty of All Things, Bow Thayer and Perfect Trainwreck (from the self-released Eden – Live at the Chandler)

Thayer’s 2013 release Eden was a real gem, an organic slice of Americana with a slightly jam band feel. Well, Thayer and the boys are back with a complete live performance of said album, recorded live at the Eden cd release show in Thayer’s native Vermont. The talented group of musicians prove that they are the real deal, a band that can beautifully and consistently capture their studio magic on a live stage.

Hold On to Rockets, Gina Villalobos (from the self-released Sola)

Few artists capture melancholy as skillfully as Villalobos. Her music walks the subtle line between tranquility and yearning, a sound made all the richer by the mix of angst and charm in her voice. It is a potent combination that makes Sola, her first release in five years, such as treat.

Combine two parts New Orleans rhythm & blues with one part rock & roll and you’ll end up with a sound like Glen David Andrews. Like many an artist, he has faced down some personal demons and emerged with a powerful and personal musical statement.

Redemption is filled with plenty of guitars and horns but it is Andrews’ booming voice that stands front and center. It has a sinister quality that is intoxicating, coming across like a potent mix of a preacher and an old bluesman.

As an added bonus, Andrews invited some friends to sit in on various tracks. Ivan Neville, Galactic’s Ben Ellman and guitarist Anders Osborne all join in the redemption.

When you just need some good ol’ rock and roll, look no further than Cheap Girls. The Lansing, Michigan-based trio take great pop hooks and serve ‘em up with burnished flair. Bassist Ian Graham sings with a bit of a drawl that makes for a nice contrast with the raucous noise that he and his bandmates make.

Lots of bands like to say that their music is best played loud. With Cheap Girls it is true.

The High Road, Archie Powell and the Exports (from the self-released Back in Black)

Did someone piss off Archie Powell? His latest release has an angry edge (and lots of shouted vocals), much more so than 2012’s impressive Great Ideas in Action. Don’t get me wrong, Powell still knows his way around a pop hook and there are plenty to be found here. Even when he slows things down, albeit to a tempo just a notch below “furious”, the songs still have some venom and punch. The Exports are in fine form as well, making quite a racket of their own.

Gimme Truth, High on Stress (from the self-released Leaving MPLS)
This is one of those unfortunate posthumous reviews as the Minneapolis-based quartet recently called it quits and played their farewell show. ‘tis a shame, as the band really know their way around a rock song. Leaving MPLS is chock full of hearty guitar-driven rock and roll, the kind of fist-pumping songs that beg to be heard live. Pardon the pun but they are leaving on a high note.

You Are Gold, The Soft White Sixties (from the self-released Get Right)

This San Francisco-based quartet walk the line between the 1960’s R&B-influenced pop that their name suggests and contemporary indie rock. If you like this shimmering track, you’ll find plenty more like it on their latest release.

Audio Download: The Soft White Sixties, “You Are Gold”