Let me get straight to the point. Buy this song. Buy it not because it is a great song, although it is. Buy it because when you do, you’ll be supporting a fellow music fan and longtime friend of Twangville who is waging a fierce battle with ALS (otherwise known as Lou Gehrig’s Disease).

Click play to listen while you read more about this incredible song and the wonderful people that it benefits.

This is a story of two incredible people. One you may know; one you likely don’t.

The first is Matthew Ryan, a singer-songwriter who personifies everything that I love about rock and roll. Whether he is singing a stirring acoustic ballad or a ragged guitar-driven rock song, Ryan’s performances are consistently as passionate as they are powerful.

The second person is my friend John Anderson. John, with the love and support of his wife Amanda, has been waging an extended battle with ALS, a debilitating disease often referred to as Lou Gehrig’s Disease.

John’s name may be familiar to some of you. For many years before ALS took its toll, John annually shared his SXSW highlights with the Twangville community. His posts, including this review of a 2008 Matthew Ryan show, were always some of my favorites. They are wonderfully written and are filled with John’s wit and wisdom. (See all of John’s Twangville posts here.)

I suspect that if you’re reading Twangville, you probably share something in common with John – an unbridled passion for music. Yet I would wager that your intensity pales in comparison to John’s. Hell, even I stand in awe of his boundless enthusiasm. As Ryan said in a moving note about John, “John being a true believer in the ability of Rock N Roll to throw fists in the air and inspire hope against odds wouldn’t have it any other way.”

To raise funds to support John and Amanda as they cope with the financial and emotional realities of ALS, Ryan is sharing a song from his recently recorded but unreleased new album. It’s not just any song but a staggering rock anthem. Ryan explains:

It was my idea to do this, I was grateful when they accepted the gesture. The song we chose is not a sublime lament, but a noisy and pounding rallying to the better parts of our nature and perseverance with gang vocals, poetry and some giant propulsive electric guitars.

The song was written with a lot of people in mind. But John was absolutely one of them. Something beautiful happens to people when they’re fighting for something.

Knowing John as I do, he would undoubtedly insist that I speak to the glories of the song and the forthcoming album from which it was taken. I’m more than happy to oblige.

After 2012’s wonderfully sublime and cinematic In the Dusk of Everything, Ryan was apparently ready to rock. He traveled to Woodstock New York to work with Kevin Salem, a masterful guitarist and producer. The duo, along with a crack band that included The Gaslight Anthem’s Brian Fallon, cranked up the guitars with such intensity that one wonders how Salem’s studio wasn’t reduced to a pile of rubble.

Don’t believe me? Listen to “An Anthem for the Broken.” If ever there was a song that is the perfect rock anthem, and one that embodies the spirit of the man with whom I’ll forever associate it, this is it. 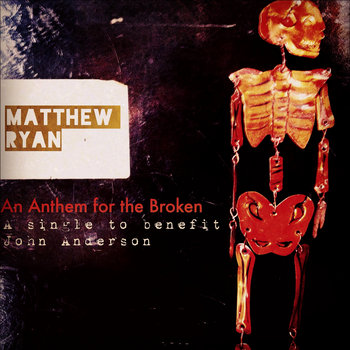 AN ANTHEM FOR THE BROKEN

An anthem for the real reward
The sometimes broke and bent before
Where hope is lost and winter birds
Float from the wires when shots are heard
An anthem for my mother’s arms
The bravest walk, the big alarm
The boxers, cops and soldiers too
The ones who need no gratitude