Although we tend to think of the rebellion against the slick production values that Nashville country music is perhaps best known for as a fairly recent phenomena, it dates back over 50 years to a group of artists, and a Capitol Records producer, that called Bakersfield, California, home.  The Bakersfield Sound eschewed the strings and overdubs in favor of straight-ahead instrument picking and a tap-your-foot backbeat.  Although a number of artists over the next decade recorded Bakersfield-influenced albums, the two biggest stars were Buck Owens and Merle Haggard.

Country mega-star Vince Gill and his buddy, Paul Franklin, have decided to pay tribute to those early rebels with a collection of Owens and Haggard songs from that era entitled, simply, Bakersfield.  Containing 5 songs each made famous by, and mostly written by, Owens and Haggard, the disc is a peek back into time.  Although obviously recorded with modern equipment, Gill produces the Telecaster squall and Franklin the pedal steel twang that started the west coast sound that impacted everyone from The Flying Burrito Brothers and Pure Prairie League in the 70’s to I See Hawks in L.A. today.

As far as the cuts themselves, two were real stand-outs for me.  The record opens with a Buck Owens number, Foolin’ Around.  With a clear influence from Bob Wills and his western swing it features Franklin on pedal steel and goes to the heart of the twangy sound you’ll recognize immediately.  Not to mention the lyrics with their story of love that can’t be broken, “when you’re tired of foolin’ around with two or three, come on home and fool around with me.”  Aside from Mama Tried, probably my favorite Merle Haggard song is The Bottle Let Me Down, and it’s included here.  It’s got some great instrumental interplay between Gill’s guitar and Franklin’s pedal.  Gill certainly has a silkier voice than Haggard, and it adds a touch of melancholy not captured in the original. 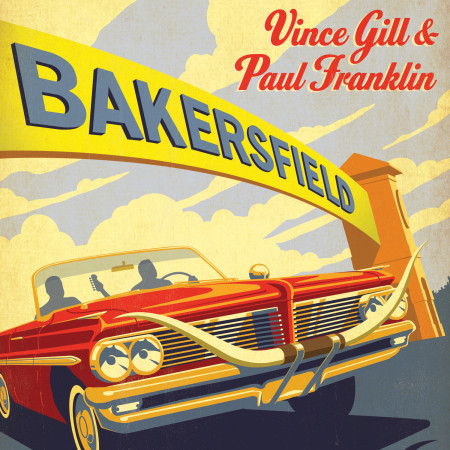 If you’re in a mind for some old school country music, or maybe want a glimpse into the sound that influenced generations, you can’t go wrong with Bakersfield.

As luck would have it, our friends at EMG have offered a few copies of Bakersfield for Twangville readers to call their own.  So post your favorite Bakersfield song & artist in the comments section before August 15th, 2013, at midnight ET and the winner (drawn at random from all those submitted) will get a signed copy of the Bakersfield CD.  The runner-up (the next name drawn) will get a regular copy of the CD.  Although Vince and Paul chose to just cover Haggard and Owens songs, we’ll give you a little more leeway if you happen to like another Bakersfield artist (I happen to be partial to Jean Shepard.)

**By participating in Twangville contests you agree to allow Twangville to post the winner’s name and city on our web site. We pass along the winning addresses to the record company or appropriate party for fulfillment. Twangville will not use your address for any other reason. Contest open to US residents only.